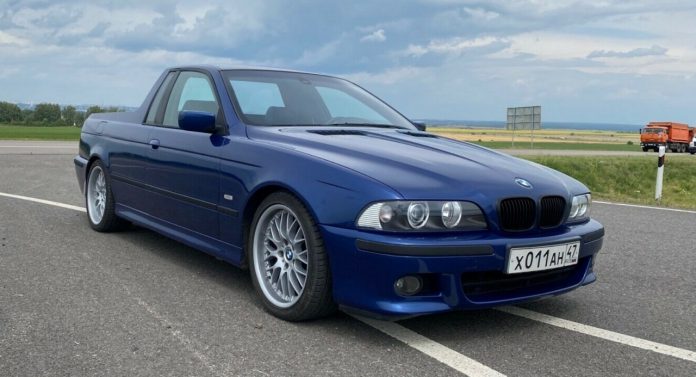 Despite some isolated attempts that failed to reach dealerships, the idea of a BMW pickup has never been taken seriously in Munich.

Sure, the Bavarians built the X7 Pickup last year, but that was just a one-off show vehicle created for the company’s Motorrad Days. The 1986 E30 M3 Pickup is arguably more famous, but that car was nothing more than a skunkworks project created by BMW M to transport various equipment and parts.

We could not open the subject of BMW pickups without mentioning the E92 M3 Pickup Truck Concept the automaker built in 2011 as an April Fool’s joke. But while BMW never took pickups seriously, other people did.

People like the owner of this 2000 5-Series E39 that has been converted into a two-door pickup, for example. If you’re a CarScoops regular, you probably remember we featured this unusual build earlier this year, when it was on sale in Russia for approximately $32,000.

Apparently, the car failed to sell. We say that because we found an ad for it on eBay, with a buy-it-now price of $30,000. If you’re interested, you should know that the buyer is responsible for vehicle pick-up or shipping, and that’s a very important detail because the car is located in Kursk, Russian Federation.

The listing does not offer too many details, though it says the E39 5 Series pickup is in “excellent condition” with 5,000 km (3,100 miles) on the clock, although we assume that’s the mileage covered after the conversion and not from new. The build is said to have taken four years to complete and appears to be based on the Touring (aka estate) model. Modifications also include a new suspension, new exhaust, as well as better noise insulation.

How the coronavirus pandemic might change the car business for good