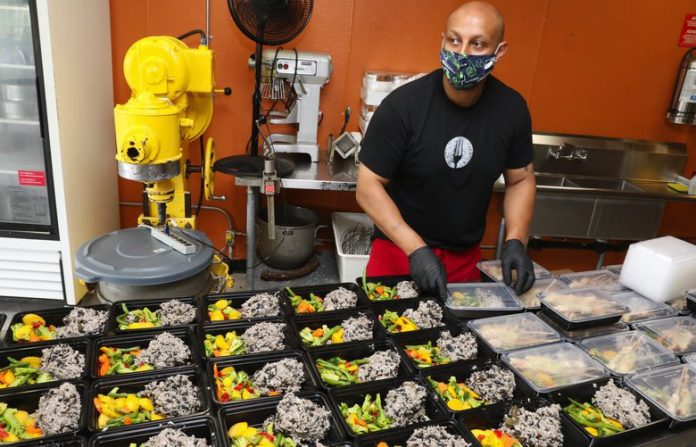 Editor’s note: This is one in a periodic series called Stepping Up, highlighting moments of compassion, duty and community in uncertain times. Have a story we should tell? Send it via email to newstips@seattletimes.com with the subject “Stepping Up.”

The sky was turning gray when Luam Wersom pulled into the housing complex, but the rhododendron bushes, in pink and white, were bright.

Waiting for a shopping cart to unload food from his van — meals of fish, veggies, rice and beans — Wersom scanned the property.

“I used to have to mow this grass,” he said. As a teenager in a summer employment program for kids living in King County Housing Authority units, Wersom helped to care for its properties. He had to drain the courtyard, where he now stood, when Seattle rain turned it into a swamp. Sometimes, he carried people’s trash and dug holes to place signs.

More than 20 years later, he can see what his hard work was for.

“Unless someone tells you it’s low-income housing, you wouldn’t know,” Wersom said.

Wersom didn’t grow up at this complex, Northridge I and II. It’s for people ages 62 and older and for those with disabilities. But he grew up down the road at Shoreline’s Ballinger Homes.

More on the coronavirus outbreak

To escape civil war as his home country, Eritrea, fought for its independence in East Africa, Wersom’s family, six in all, fled to Greece before seeking refuge in the United States. Public housing in Seattle provided them a fighting chance to start over. And the summer work program, Wersom said, helped to teach him the values of hard work and staying disciplined.

He used those skills to find his way out of there.

On that breezy day in May, long before the rain clouds rolled in, Wersom woke up before the sun to make food in a North Seattle restaurant, his restaurant, for seniors living in two public housing units. His business has taken a hit due to the coronavirus pandemic, and his staff’s been cut in half, but one day every week since the end of April, Wersom gets up early to make hundreds of meals for the people whose grass he used to cut.

Wersom, who is now 39, started working at Mojito, a Latin American restaurant in Seattle’s Maple Leaf neighborhood, as a dishwasher when it opened more than 20 years ago. In the early days, Wersom said, before they had a dishwashing machine, he would make a fist and his skin would crack and bleed from hours spent bent over a sink.

Today, he’s the sole owner of Mojito, the bright yellow restaurant that sits on the corner of 11th Avenue Northeast and Lake City Way. It’s small inside, but Wersom’s hospitality makes up for it.

“If you go twice, we’ll remember you,” Wersom said. “If you come in and you’ve lost your dog, I’ll remember that.”

He treats the street corner like it’s his front porch, stopping to talk to people and running outside to give an elbow bump. Across the street from the restaurant, Wersom and his wife, Lindsey, own a commercial kitchen, where they prep most of the restaurant’s staples, like slow-roasted pork butt and congri (Cuban rice and beans). On the days he’s delivering food to seniors in low-income housing, Wersom and his staff use the space to prepare and package the meals.

To maximize speed, they place all of their metal prep tables into one, long row, then cover the surface with plastic to-go containers. On that breezy day in mid-May, after the rice is cooked, the fish is done baking and the mixed veggies are steaming hot, Wersom, his wife and two members of his staff gear up to get to work. They slide on black plastic gloves, grab large metal spoons, and transfer the food to large containers held on rolling carts.

Working down both sides of the long table, they move quickly but quietly. A scoop of veggies drops into a container from the right, then a helping of congri from the left, followed by the fish or some chicken skewers. Wersom leads the rear with a squirt of homemade sauce — made of lime juice, cilantro, garlic and some secrets he can’t share. It looks like a well-rehearsed dance. Hands cross over hands. Latin music plays on the radio. A tiny disco ball hangs overhead.

“We don’t want the food to get cold,” Lindsey said.

From start to finish, the process takes under 30 minutes to plate, package and bag more than 100 meals that will go to two public-housing complexes.

“We were doing to-go before, but never on this scale,” Lindsey said.

Wersom hasn’t had to shepherd the costs alone. In April, a longtime customer saw on the news that Wersom’s business had taken a hit, literally. Security cameras caught two people in the middle of the night spray painting and defacing Mojito’s food truck. The customer stopped by the restaurant to ask what he could do.

“He wanted to give me a check,” Wersom said. “I said, ‘No, I don’t like handouts. But what you can do is you can feed people.’”

Originally, Wersom wanted to find a way to use the money to feed his former neighbors in Ballinger Homes. But after taking the idea to King County Public Housing and the YMCA, they decided on helping seniors, folks who have been told by public health officials to stay home and isolate for months now.

The project started at the end of April and went through May 18. Wersom said the work is on hold until they can find more funding, which helps him cover some of the food costs.

A global pandemic doesn’t seem like the obvious time to overextend his restaurant in the areas of giving. More than half of Mojito’s business has disappeared, Wersom said, and the cost of some foods has doubled, sometimes tripled. But Wersom sees it differently.

After his family members fled Eritrea, they received food from churches in Greece. Food stamps helped to keep them going. And at Ballinger Homes, they paid about $400 for a four-bedroom apartment.

Wersom knows firsthand how far a little extra support can take a person.

And now, as a Seattle business owner, he’s not going to forget it.

Addressing the potential impact of coronavirus disease (COVID-19) on Ready To...