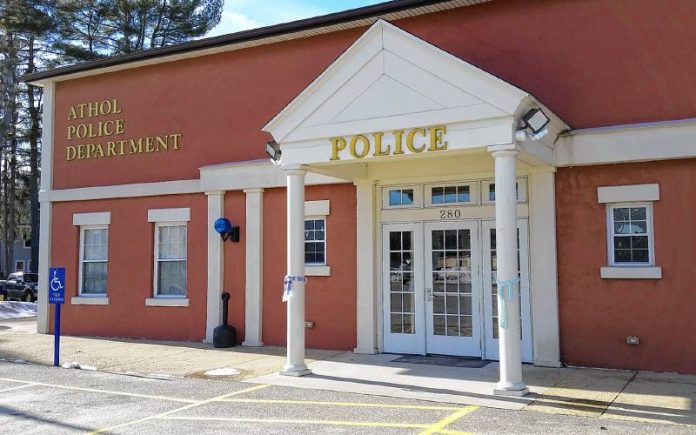 7:41 a.m. — Dale’s reporting they got a call for a tow and the vehicle was in an accident, White Pond Road. Operator struck a stump next to the road.

9:07 a.m. — 911 caller is requesting an ambulance for a 42-year-old who is possibly having a heart attack, Exchange Street. Conscious and alert on arrival. Subject transported by AFD to Athol Hospital.

10:05 a.m. — 911 caller is reporting a male party that will not leave, South Main Street. Male party was asking customers for money/ride and was moved along at the request of the manager. Officer transported the party to bus stop in Orange center.

10:15 a.m. — Caller would like to speak to ACO about a rogue rooster, Swanzey Street. Picked up rooster.

11:53 a.m. — Caller requesting a welfare check on a client that they haven’t seen since last Monday and there is now a U-Haul truck and a for sale sign in the yard, Conant Road.

12:23 p.m. — Caller reporting that a tenant is breaking out the windows of his house, South Main Street. Verbal argument between subjects over use of a dumpster. Window damage was several days old.

2:56 p.m. — Callers from Athol, Idaho reporting a female posted online that she was going to end her life, Exchange Street. Officer notified and caller was directed to call Fitchburg Police.

3:54 p.m. — Caller stating that there are multiple vehicles pulled up on the side of her lawn and there is possible drug activity occurring, Park Street. Spoke to reporting party. Vehicles were gone on arrival.

5:09 p.m. — Report of a bear in the area, Spring Street. Officer checked the area and it is gone on arrival. Officer advised the people walking in the neighborhood of the report.

5:53 p.m. — Party outside of the lobby requesting an officer to escort her to old residence to pick up property, Lake Street. Officer stood by while property retrieved, no problems.

7:57 p.m. — Caller stating there are vehicles speeding up and down the road and he wants some enforcement on the road, Bearsden Road. Two parties advised to slow down.

8:36 p.m. — Caller looking for advice, Conant Road. She’s in the hospital, her house is for sale and her son will not leave her house. He doesn’t live at that address. Officers sent party on way. Officer called back reporting party and she states that she allowed him back and wants him kicked out again if he is still there at 11 p.m. Officer advised that an officer can advise him to leave but reporting party cannot keep allowing subject back to residence and consider it trespassing.

9:11 p.m. — 911 caller requesting officers to her residence for unidentified objects flying in the sky, Sanders Street.

9:21 p.m. — Caller requesting a welfare check on their cousin, South Street. She had called them saying her boyfriend was holding her hostage and not letting her leave and was going to be taking her cell phone. Spoke with female who states she had been talking with friends about an argument that occurred several days ago. She states she is fine and does not require assistance.

9:36 p.m. — Officer waived down by a pedestrian for a suspicious vehicle, South Main Street. Vehicle unoccupied.

11:52 p.m. — Athol Hospital employee calling for assistance involving a Section 12 patient that is being uncooperative and yelling, Main Street. All units advised. Officers were able to calm party down so he was cooperative for medical staff. No further issues.

Update: Driver collides with semi-truck on Highway 46 near Shandon rest...