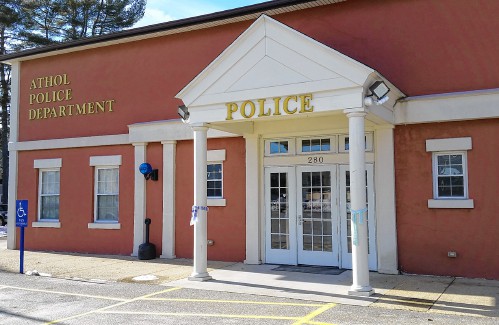 1:26 a.m. — Officer out with party, Main Street. Advised the store was closed and directions given to Honey Farms, which is open 24 hours.

3:20 a.m. — Officer out with a vehicle, Hapgood Street. Party was on lunch break from Pexco. All was secure.

5:30 a.m. — 911 caller reporting her son is not breathing and unresponsive, Tom Swamp Road. Reporting party hung up prior to EMD.

9:11 a.m. — Walk-in reporting a motor vehicle accident that occurred on Friday, Main Street. Reporting party states on April 10 he was getting money from an ATM when a vehicle “bumped” his truck. The damage was isolated to the rear bumper. No vehicle description given, no license plate, only a name of a female party attached to the call was provided. At this time, the reporting party is unsure if he wants his insurance company involved.

11:06 a.m. — Officer out on a welfare check, Main Street. Negative contact. Female party called and asked why an officer was at her house earlier. She is now home and called the school, but no answer.

11:24 a.m. — 911 caller reporting the smoke detectors are going off caused by burnt food, Shore Drive. Reporting party is also reporting someone in the apartment is intoxicated and may need to be checked out.

1:52 p.m. — Caller is reporting a red Town and Country caravan with no license plates just ran over some of his neighbor’s stuff multiple times, Wendell Street. Owner of the Town and Country’s husband drove over in-laws’ property and walked away. Advised all parties of options.

2:11 p.m. — Caller requesting an escort to retrieve his belongings, Crescent Street. Restraining order in place, but female no longer lives at address.

3:09 p.m. — Caller reporting an erratic operator, South Main Street. Officer is out with the vehicle.

3:51 p.m. — Caller reporting he was engaged to a female and they have called it off and he wants his ring back, Exchange Street.

4:38 p.m. — Party calling about a bunch of needles on the ground outside of driveway, Pleasant Street. Needles were taken care of.

6:37 p.m. — Caller reporting a male party knocking at her door, Cottage Street. She did not recognize him and he looked suspicious. Spoke to the male, he was sent on way. Reporting party was advised to call back if he came back.

7:21 p.m. — Caller requesting a welfare check on her friend who hasn’t been answering her phone calls, Lenox Circle. Officer made contact, all is well.

8:01 p.m. — Caller stating neighbors have been verbally arguing all day long, Central Street. Both parties advised to quiet down.

8:40 p.m. — 911 call for a disturbance, Crescent Street. Male party throwing all of female party’s belongings out the door. Female got her belongings and went to her mother’s for the night. Only verbal altercation. Female was advised to call at a later date to go and gather the rest of her belongings.

9:41 p.m. — 911 call for a vehicle into a house, Burma Road and Wilson Avenue. Keith A. Shaw, 37, of Athol, was arrested on charges of OUI liquor OR .08%, negligent operation of a motor vehicle, leaving the scene of property damage, and operating motor vehicle with suspended license.

10:56 p.m. — Caller stating there is a black bear in neighbor’s back yard, Lenox Street. Reporting party stated there are bird feeders.

How to properly adjust wheel bearings

Truck vs. Two Pedestrians Sends Both to Hospital