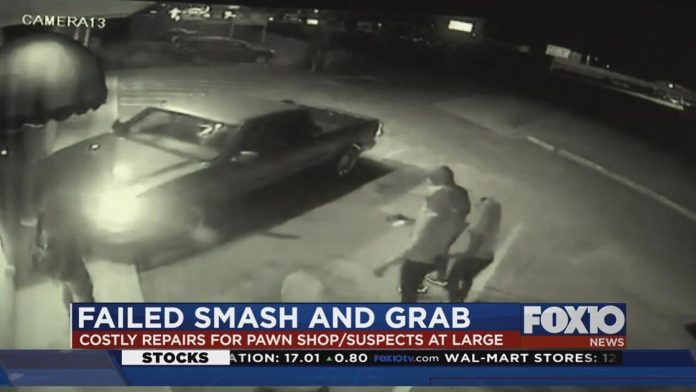 MOBILE, Ala. (WALA) — Dramatic surveillance video of an attempted smash and grab at Earl’s Pawn & Jewelry on Schillinger Road.

It happened around 3 a.m. Monday, June 1st. The thieves used a stolen pickup truck to plow through the front doors — the impact triggering the store’s alarms.

“When we reviewed the video — they came through one time and then they came through the second time and looked like they were going to drive into the building — but at the last minute they swerved. Then the third time they came and they got a lot of speed and as you can see they drove through the front doors,” explained Rhonda Roebuck, Earl’s Pawn & Jewelry Manger.

But their plan was spoiled after the getaway truck got a flat tire. At least six hooded suspects waiting in the wings come running up and jump into the truck and take off. They abandoned the stolen truck down the road and took off on foot.

“You can tell from the video — they had bricks and tire rods and those sorts of things,” said Roebuck. “We were very blessed they did not get inside. They were likely out to get guns, jewelry, and electronics — anything they can get their hands on and go.”

Even though they left empty-handed, Earl’s is now left with a pricey repair bill.

“They had to get up a good bit of speed and hit this with a lot of force for this to be damaged… and you can see it goes all the way through. So we will definitely have to get that repaired. It’s not cheap. Thiis a temporary door… so just the door and the flashing — is going to be about $6,000,” said Roebuck.

While they know it’s a long shot — Earl’s Pawn & Jewelry hopes by showing the video that someone who knows something will come forward.

“If we can keep someone else from having to go through this — absolutely — we want justice,” said Roebuck.

As an added precaution, Earl’s locks up their firearms and jewelry every night. Meanwhile, if you have information that can help investigators call Mobile Police 251-208-7211.

In Gallup, surrounded by the Navajo Nation, a pandemic crosses paths...