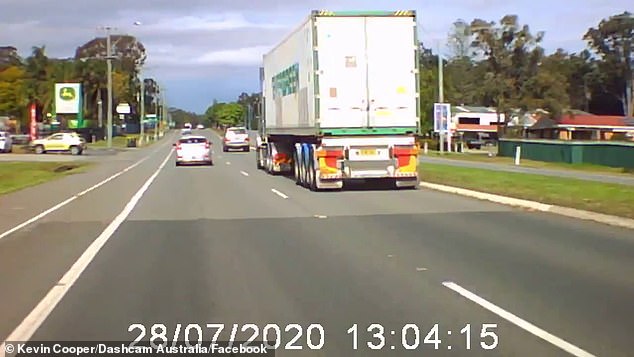 A frightening crash which saw a truck slam into a car at a multi-lane roundabout has viewers divided over who is at fault.

Footage shared to Dash Cam Australia shows a silver Hyundai in the left lane driving beside a semi-trailer at about 1pm on Tuesday.

The vehicles continue toward a multi-lane roundabout as the truck indicates to turn left from the right lane. 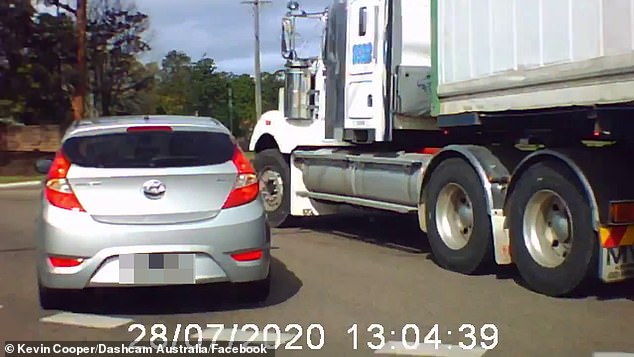 The Hyuandi does not indicate to turn left, despite being in an only left turning lane.

The car begins to take the curve of the roundabout – as does the truck – before the Hyuandi veers straight.

The car slows down before the truck slams into it.

Who is at fault?

A loud thud is heard as the back window of the Hyuandi breaks into tiny pieces and the driver parks to the side.

The footage has social media users divided, with most blaming the Hyuandi for trying to continue to drive straight at the roundabout.

‘Clearly the silver car, the arrow on the road clearly states turn left,’ one person wrote.

‘Car is clearly at fault. It was in a left turn only lane, and failed to remain in its lane. Clearly tried to drive straight ahead,’ another commented.

‘Silver car, they were in a left only lane and tried to go straight,’ another wrote.

Some suggested both were at fault for not being aware of their surroundings.

‘BOTH… The truck for not being aware of his surroundings and not indicating a lot earlier to show his intensions…The car for being in the wrong lane to continue thru the roundabout,’ someone commented.

‘The truck should occupy both lanes to avoid this,’ one suggested. 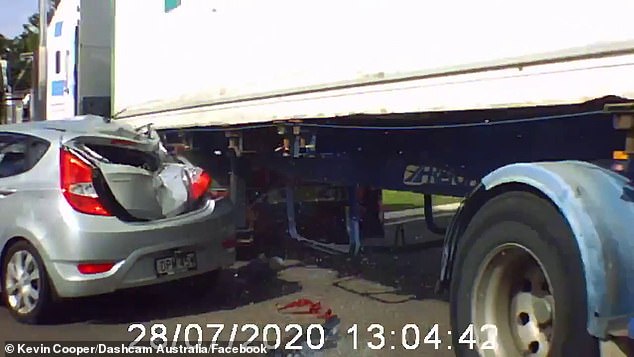 Anatomy of a protest: How a Laramie march became a movement