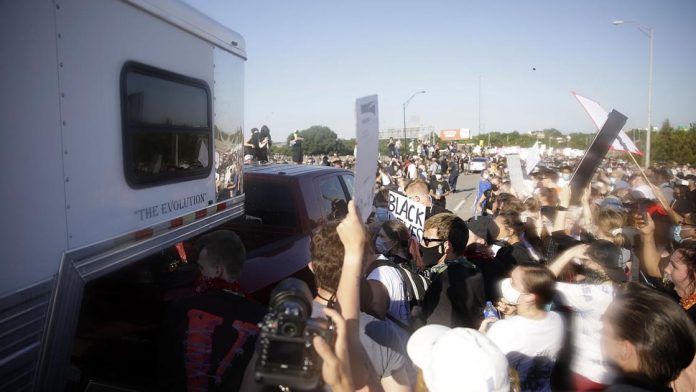 State and federal prosecutors are considering whether charges are warranted in the case of a man who earlier this year drove a pickup towing a horse trailer through Black Lives Matter demonstrators on Interstate 244 near downtown.

Sarah Stewart, spokeswoman for the Department of Public Safety, confirmed that the agency had turned over the results of its investigation of the incident to officials with the Tulsa County District Attorney and Tulsa U.S. Attorney offices.

She said she did not know any details of the report, including whether or not any recommendations were made to prosecutors.

The Oklahoma Highway Patrol began investigating the incident after a pickup towing a horse trailer and traveling east on I-244 near Detroit Avenue encountered the crowd of demonstrators, who had stopped traffic on the highway. Witnesses said the truck struck at least two people during the encounter, and authorities said two people suffered minor injuries.

A third person was critically injured after he fell from an overpass. A spokeswoman for the highway patrol said in June that troopers were unsure if the man fell as a result of people trying to avoid the moving truck or for another reason.

The protest in downtown Tulsa on May 31 had been part of a surge in demonstrations nationwide in the wake of George Floyd’s death in Minneapolis six days earlier.

On the day of the incident, demonstrators had previously been marching near John Hope Franklin Reconciliation Park downtown. A group of protesters at one point peeled off towards I-244, stopping traffic on the highway, according to prior World coverage.

Tulsa County District Attorney Steve Kunzweiler said Wednesday his office is still in the process of reviewing reports from OHP. He did not say what, if any, recommendations OHP investigators may have made about how to proceed in the matter.

Kunzweiler said previously that OHP’s investigation into the incident could be lengthy due to the volume of videos and photos available from possible witnesses.

Meanwhile, a spokeswoman for U.S. Attorney Trent Shores’ office confirmed that they had received the OHP report, but she declined to comment on any pending charging decisions.

Attorney Jonathan Nation said he represents a demonstrator who suffered a broken leg and two sprained ankles when struck by the pickup truck.

Nation said he believed a “reckless endangerment” charge at the least is warranted against the driver, who has not been identified.

Nation said his client was never contacted by the OHP despite filling out a police report on the incident.

Gallery: Protests in Tulsa in May, June