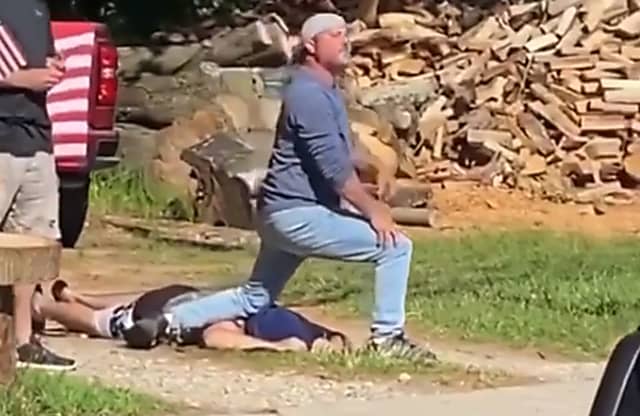 State authorities said they’ve suspended a corrections officer who participated in the recording of what they called a “hateful and disappointing video” in which one man kneeled on the neck of another during a counter-protest to a “Black Lives Matter” march.

In videos of the incident that continued to spread Wednesday, police-escorted protesters marching down a Franklin Township street in Gloucester County on Monday pass a group of men reenacting George Floyd’s death on a private property stacked with firewood for sale.

A pickup truck bears an American flag and a “Trump 2020” banner, while another truck flies a “Thin blue Line” flag. An “All Lives Matter” sign hangs nearby.

The man kneeling on the other exchanges shouts with the protestors.

The New Jersey Department of Corrections issued a statement Tuesday afternoon citing an officer’s participation in the filming of a “hateful and disappointing video that mocked the killing of George Floyd.”

The officer, who works at at Bayside State Prison in Leesburg, “has been suspended from their post and banned from NJDOC facilities pending a thorough and expedited investigation,” the statement says.

His brother, James DeMarco, apparently works for FedEx and has since been suspended, according to reports.

“Without an understanding and mutual respect for all individuals, we can never aspire to create a united community based upon the idea of human respect and dignity for all,” they said.

“The Franklin Township Committee and the Franklin Township Police Department are appalled and saddened by the revolting actions of certain individuals after Monday’s locally organized peaceful march. This is not who we are as a Community. We support the goal of this march, which is to spread awareness and to ensure a better future for all of us. Without an understanding and mutual respect for all individuals, we can never aspire to create a united community based upon the idea of human respect and dignity for all.”