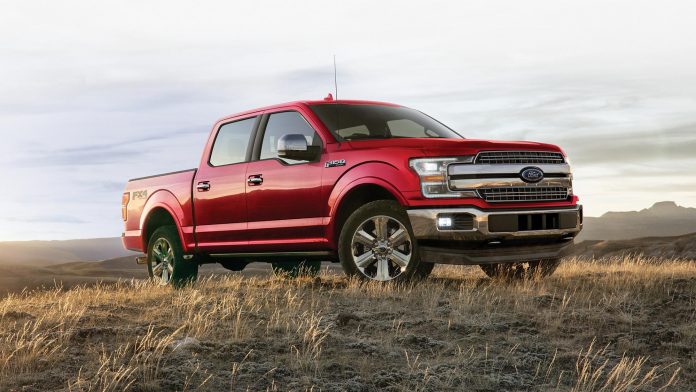 The wildly popular Ford F-150 pickup truck with its family of Super Duty siblings is second only to the iPhone when it comes to branded consumer product sales, according to a new economic analysis from the Boston Consulting Group.

While the iPhone generated $55 billion in revenue to $42 billion for the F-Series in 2019, the F-Series generated more revenue than the National Football League, Major League Baseball, National Basketball Association and National Hockey League combined — which was just $40 billion, the analysis showed.

All by itself, the F-Series full-size pickup truck franchise within Ford Motor Company is so big that it would make the list of Fortune 100 companies.

“It is impossible to overstate the economic significance of the Ford F-150 to Ford and to the U.S. economy,” said market analyst Jon Gabrielsen. “The Ford F-150 is the single highest volume vehicle sold in the U.S. and has been for years.”

The bestselling F-150 and its F-Series siblings are Ford’s most valuable franchise and they’re more important now than ever because the company has forecast a $5-billion loss in second quarter after a two-month industry shutdown related to the coronavirus. The F-150 is sometimes called the “golden goose” by analysts, and they say Ford’s financial health depends on the F-Series.

The Ford F-150 was the most considered pickup truck among shoppers by a wide margin during the first three months of this year, according to Kelley Blue Book.

“If one looked at a bar graph showing sales of every vehicle ever conceived and sold by mankind, that bar graph looks roughly like a side profile of a lawn with a dandelion in it, That dandelion is the F-Series,” said Eric Noble, president of The CarLab, a car design consultancy based in Orange County, California.

“If you think about it, this thing sells half a million to a million units a year and basically has been killing it for 100 years,” he said. “People argue about how long the F-Series has been the sales leader. Farmers all over America just took the beds from their wagons and put them on the back of Model Ts. Ford was the first manufacturer to make pickup trucks in an assembly plant.”

Impact beyond the obvious

• he Ford F-Series supports about 500,000 U.S. jobs through production and sales, representing 13 to 14 jobs for every direct Ford employee working on F-Series.

The Ford Ranger knocked the Jeep Cherokee out of the top spot, and Tesla made its debut in Cars.com’s 2020 American-Made Index.

The annual survey results, released June 23, rank new vehicles that “contribute most to the U.S. economy” through U.S. factory jobs, manufacturing plants and parts sourcing, according to a Cars.com news release.

The Ranger midsize pickup, a nameplate that was relaunched to much fanfare last year, is built at Ford’s Michigan Assembly in Wayne, which is west of Detroit. Fiat Chrysler Automobiles’ Jeep Cherokee, which is built in Belvidere, Illinois, holds the survey’s No. 2 spot.

Tesla, with its factory in Fremont, California, captures the No. 3 and 4 spots, respectively, with its Model S and Model 3, and No. 9 with its Model X. Honda has spots 5, 6 and 7 with its Odyssey, Ridgeline and Passport, all made in Lincoln, Alabama. And General Motors has two vehicles, both Chevrolets, in the top 10, the Corvette (Bowling Green, Kentucky) at No. 8 and the Colorado pickup (Wentzville, Missouri) in the final spot.

The addition of Tesla to the list is noteworthy. This is the first year the company supplied the information needed for it to qualify, according to Kelsey Mays, Cars.com’s senior consumer affairs and vehicle evaluations editor.

“Tesla’s also the only automaker on the list to build 100% of the cars in America that it sells here,” Mays said.

Of about 350 car models on the market this year, 91 qualified for the index, which is in its 15th year, according to the news release.

Where a vehicle is made is becoming increasingly important to consumers, according to Mays.

“We live in a global economy, but Cars.com’s research found 70% of American shoppers consider a car’s U.S. economic impact a significant or deciding factor in their vehicle purchase. The COVID-19 pandemic is increasing Americans’ desire to buy local, with 37% reporting they are more likely to buy an American-made vehicle in light of the economic disruption of COVID-19.”

According to AAA, the annual maintenance and repair on new vehicles (factory-recommended maintenance, replacement tires, extended warranty costs and services associated with typical wear-and-tear) will, on average, cost a driver $1,186.