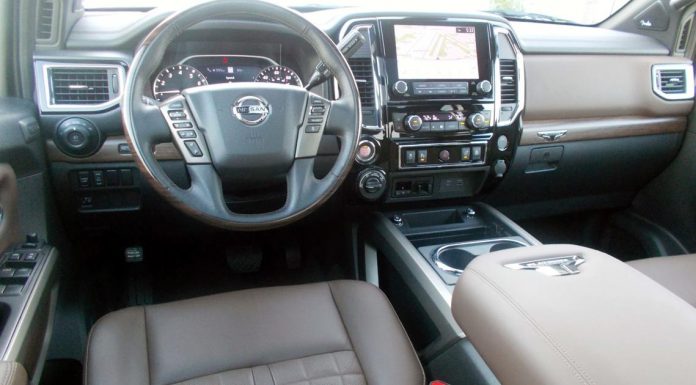 Nissan’s big Titan pickup undergoes a redesign for 2020 that features an exterior facelift and interior upgrades designed to compete with the domestic truck dominance but is it enough to move the bar? That verdict remains to be seen but it gets an “A’ for effort.

There’s more power this year with a rugged 5.6-liter V8 cranking out 400 horsepower while mated to a new nine-speed automatic transmission but it’s the only engine/tranny available in a sea of domestics offering more. Nissan is hoping its added safety features and technology boost will lure more consumers their way.

Spending a week with the new Titan Platinum Reserve Crew Cab was a pleasant experience. Its performance was top-notch with plenty of passing power. The new transmission is one of the best out there. We saw no hesitation with upshifts or downshifts and it finds the right gear instantly, outperforming many rivals.

That said, fuel economy is lacking when compared with EPA testing. In combined highway/city travel we recorded 15.3 miles per gallon to 18 with EPA. To be fair, our driving combined some aggressive maneuvers along the way.

Nissan has upped the ante with an available 9-inch touchscreen featuring higher definition and available Wi-Fi hotspot. In the “get what you pay for” category, varying seat material is assigned to each trim level although interior storage is plentiful throughout the lineup.

Audiophiles will be elated with an available 12-speaker Fender system designed exclusively for Nissan trucks. It was onboard in our tester and offered an awesome sound experience.

When you add up all the new features in the Nissan Titan, it becomes a great value offering a compliant ride, decent hauling and towing numbers with very comfortable zero gravity seats in a rugged frame. In addition, the Titan offers the best truck warranty with five-year bumper to bumper coverage.

Trouble is domestic rivals own the truck market in this country. Ford F150, GMC Sierra, Ram 1500 and Chevrolet Silverado are battling each other for best in class and offer more than the Nissan Titan or Toyota Tundra, both fine trucks.

If you are in the pickup market be sure to test drive the Titan and see firsthand how it measures up. You might be surprised.