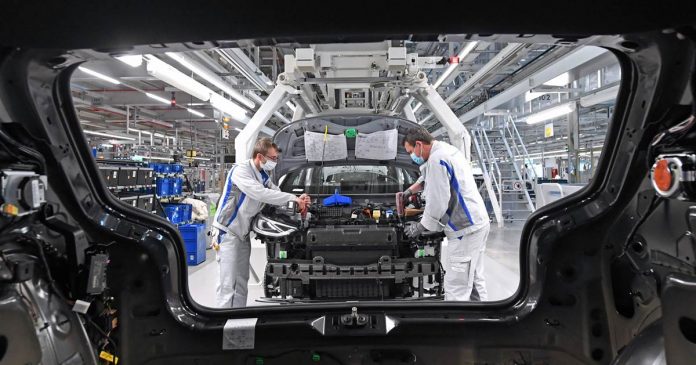 A growing list of automakers hope to restart their assembly lines — some as early as this week — as manufacturers battle to prevent a record sales slump from steepening.

The 54 auto assembly lines —along with hundreds of parts plants — ground to a halt in mid-March as the extent of the coronavirus pandemic became increasingly apparent.

With new car sales drying up, that didn’t matter much for the past month. But with sales starting to rebound, according to a new report by J.D. Power, manufacturers want to be positioned to meet resurgent consumer demand.

The big challenge will be ensuring that employees can take their place on assembly lines without having to fear getting potentially deadly COVID-19, the disease caused by the coronavirus. Hundreds already have, with several manufacturers, including Fiat Chrysler and Ford, reporting a number of fatalities.

“There is no going back to the normal for the foreseeable future. We have to adjust to the new normal,” said Chris Reynolds, Toyota’s chief administrative officer for North American manufacturing operations, which will start to reopen May 4.

The Japanese automaker, which operates a network of parts and assembly plants in the Midwest and South, offered some insight into the steps it is taking to protect workers when they begin to report back next week. Work stations have been reengineered to increase the distance between workers, said Sean Suggs, president of Toyota’s big assembly plant in Mississippi. Even cafeterias have been redesigned, and plastic sheets have been installed between sinks in factory restrooms.

Line workers, meanwhile, will be wearing personal protection equipment, or PPE, similar to what’s now being used in hospitals, including masks and even face shields. Before even entering the plant, they’ll be asked about their health and have their temperature taken.

Suggs said Toyota has been networking with other automakers to share best practices for protecting line workers. Volkswagen, which plans to reopen its Chattanooga assembly line on May 3, said it has put in place 90 different steps to protect employees. Detroit’s Big Three have announced similar measures to reduce the risk of the virus spreading.

“You have to assume that every person (in a plant) is infected,” said David Yanez, chief operating officer of PTI QCS, a quality control firm working with a number of automakers to address the challenges of building cars during a pandemic. “Our culture now has to be about safety first. If workers don’t feel safe it could disrupt the entire production chain.”

“You have to assume that every person (in a plant) is infected. Our culture now has to be about safety first. If workers don’t feel safe it could disrupt the entire production chain.”

That’s a thought that worries Julie Classen, a veteran line worker at Ford’s Michigan Assembly Plant. She was one of a number of workers at the truck factory to be stricken by COVID-19 last month. Classen has largely recovered and expects to be called back early next month.

Classen has already been shown some of the steps Ford plans to take but has “a hard time believing they’ll actually make it safe enough,” though she agrees it will help to “space out the jobs more” so there is less likelihood of direct person-to-person contact. She also worries about what it will be like trying to work while wearing all the protective gear, especially in the summer when factories such as hers can get extremely hot.

For now, automakers are set to give it a go, at least if they gain approval from states that have initiated lockdowns. One of the challenges they face is that the North American auto industry is highly integrated, so a parts plant remaining closed in one state could idle an assembly line in another. That was underscored recently when a BorgWarner factory in South Carolina was severely damaged by a tornado. That may delay the start-up of some Ford and Fiat Chrysler plants using its parts for their pickups.

Demand for those trucks has remained unexpectedly high, despite the overall slump in the U.S. new car market, noted Tyson Jominy, the head of J.D. Power’s PIN network, which tracks sales directly through real-time access to the databases of thousands of U.S. dealers. Now, other product segments are starting to show a little life.

“After many weeks of the market turning downward, what we’re seeing is a flattening (of the downturn) and indications the retail market is in recovery,” Jominy said.

Going into April, the research firm warned U.S. sales could plunge by 80 percent for the month. The numbers were off a more modest by mid-month, though still substantial — 45 percent. One reason: record incentives that have been averaging around $4,800 a vehicle over the past month and as much as $7,300 on full-size pickups. Tellingly, nearly one in four buyers opted for the 84-month, zero-interest loans that are becoming commonplace.

If anything, buyers can expect to see incentives continue to climb as automakers resume production, said Jominy, noting the best deals will be found on vehicles that have been sitting on dealer lots. Incentives on leftover 2019 models currently average around $6,600, or 50 percent more than on 2020 offerings.

But, in general, “We’re starting to see manufacturers be a bit more aggressive, to make sure they have offers compelling to buyers coming back to market,” said Thomas King, chief data officer at J.D. Power.

Justices Ponder Latin and Math for ‘Complicated and Important Case’

Polk charity works to stave off hunger for migrant families