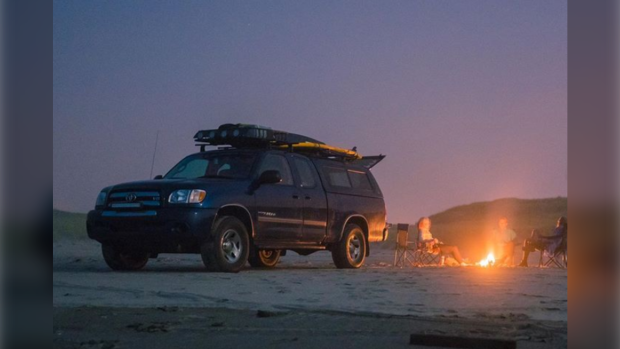 VANCOUVER —
A firefighter is asking for help locating his truck, after it was stolen from a parking lot while he worked an overnight shift fighting the Christie Mountain wildfire near Penticton, B.C.

The truck, a 2003 navy blue Toyota pickup, was taken from a parking lot in the city of Merritt where firefighters leave their vehicles while they are on deployment.

“I was pretty overtired and it almost felt like a dream,” said Connor Callaghan, describing the moment he realized the truck had been stolen.

“I hadn’t slept all night because we worked all night.”

Callaghan lives in the truck during the summer months while fighting wildfires, and was on his last shift of the summer when it was stolen.

Among the valuables in the truck were his laptop, iPad and school bag, which he needs for when he returns to school in September to finish his last year studying mechanical engineering.

“That was a big hit,” Callaghan said.

The firefighter posted about his truck on Instagram, including a variety of photos of his well-loved truck.

Callaghan says security camera footage shows the vehicle was driven out of the parking lot around 2:45 a.m. on Aug. 21, and that a the tracking system on the iPad showed that the device – and possibly the truck – were in Mission, B.C. later that day at 3:45 p.m.

The back of the pickup is covered by canopy, where there’s a mattress for sleeping and customized storage cabinets.

Adding a last-mile delivery van segment as a dealer