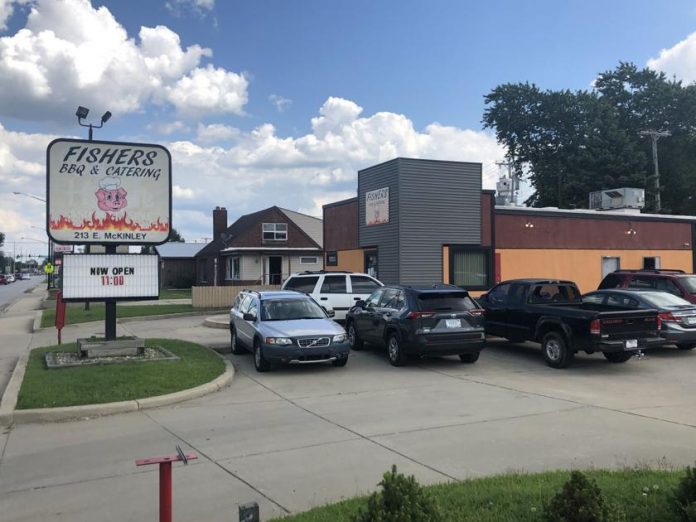 Along McKinley Highway between Division and Main streets in Mishawaka, a plume of white smoke crosses the road. A quick look around doesn’t show a fire, but soon your nose is able to reveal the cause — barbecue.

Fisher’s BBQ, formerly known as Fisher’s Tips-n-Chips, opened inside its new location at 213 E. McKinley Highway on Wednesday. The longtime barbecue and soul food restaurant was once located along South 11th Street in Niles, before owners Rob and Donna Fisher decided to move, partly as a result of the coronavirus pandemic.

“Business had slowed down quite a bit and then we were looking to downsize because of the pandemic,” Rob Fisher said. “It’s an ideal place, traffic is a little bit better and then to come back across the state line, was helpful because a lot of our clientele is from this area already. A lot of them were pleased we came back cross the state line.”

According to the restaurant’s website, the business began as a food truck in 2000 and every Saturday would set up on the corner of Auten Road and U.S. 31 for a church fundraiser. In 2010, it moved to a small space inside the Country Bake Shop building before settling inside the former Niles Dairy Queen building seven years later. Now, four moves, two economic recessions and a pandemic later, the restaurant is still moving forward, offering much of the same menu its customers have enjoyed these past two decades.

“We understand that we do miss a few people (when we move) and understand that process, but then people eventually find us,” Fisher said. “I tell a lot of people to look for the smoke.”

Fisher starts the three large smokers at 8 a.m., slow smoking sausage, chicken, rib tips and more. The restaurant is opens from 11 a.m. Tuesday through Saturday until it has sold out of its items.

Fisher describes the barbecue as a cross between North Carolina and Texas barbecue, saying people often wonder where the family is from because of the unique homemade sauce.

“When we tell them we grew up here, they don’t believe it because of the sauce and how we cook it,” he said.

The restaurant also offers fish on Fridays and Saturdays and catering options throughout the week. And although it specializes in barbecue, the restaurant also churns out soul food with items such as baked chicken breasts, rib tips, collard greens and peach cobbler. Because of the pandemic, the family restaurant has not been able to host as many community events as it once did, Donna Fisher said, but plans to start back up as soon as they can.

One thing new customers can expect at the new location is a wider variety of desserts with specials like pound cakes, sheet cakes and sweet potato pie.

The new space is admittedly small on the inside with only a couple of tables and chairs for dining in. But owners encourage customers to use the large drive-thru, especially in light of the pandemic. And for any question customers may have, Fisher’s is there to answer and treat them like family.

“It feels really good,” Rob Fisher said of the new location. “We have been welcomed really good here in Mishawaka, and this October will be 22 years we’ve been in business. … You have to live with the times and because we were able to do that, we were able to stay afloat.”

A new Valvoline Oil Change business is coming to the south side of South Bend, according to a construction design release. The new business will be located at 215 E. Ireland Road between Panda Express and Taco Bell. It was not immediately clear when construction would be complete and the business would open. … There have been several other changes at the University Park Mall. Garage inside has closed, as well as play Bounce House that filled the former The Limited space. Children’s clothing store Justice is also closing its UP Mall location with items 50 to 70% off. However, the Yankee Candle store inside the mall has reopened after initially closing in March because of the coronavirus pandemic.