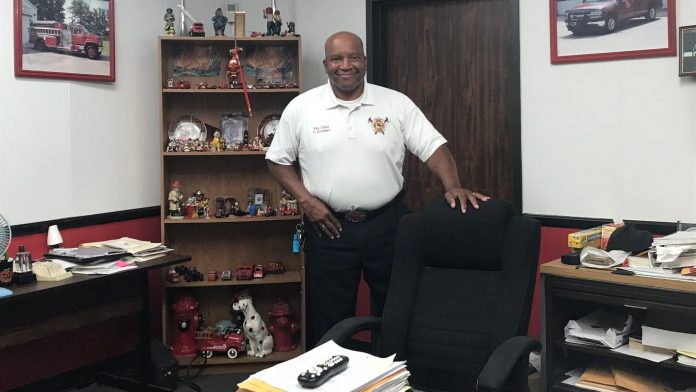 On Monday, the BFD announced the department reached a Class 1 Public Protection Classification rating from the Insurance Services Office. It was a jump up from a Class 4 rating in 2015.

“When I took over three years ago, me and Mayor Henry Cotton basically came in together, and it was an initiative of ours to take on this rating and make it better,” Crowder said.

Over the past several years, the department has obtained three new trucks, including a ladder truck to help fight fires in multi-story buildings.

“We endeavored to get a training ground to train our men better,” Crowder explained. “We have a fully operational training ground that is in the industrial park. We have a five-story training tower, a burn building. We have propane jets to show gas leak fires, and we have a classroom out there.”

The classroom provides opportunities for firefighters to train with other departments and learn a variety of firefighting techniques through various partnerships, such as one with Louisiana State University.

Crowder said the partnership has included training on fire chemistry and burn patterns and helped firefighters navigate through a maze searching for people.

“It shows the men what they are going to look at in a house fire,” Crowder said. “They go into a burn building, and they are suited up like they would be if they were going to a real fire. You actually see the fire doing its thing in a building and how to put it out.”

A training tower helps firefighters learn how to fight a fire in a large structure while a car fire demo area provides training for automobile blazes.

Also key in the effort have been various local businesses and the Morehouse Parish Sheriff’s Office.

The BFD also transitioned from using the police department’s small-band dispatch system to the one used by the MPSO. MPSO’s bands cover the entire parish and allow the BFD to better manage their calls.

“A multi-band dispatch system gets our notifications and our alarms out to us better, making it perfect for us as another advancement in the rating, and it made our dispatch better,” Crowder said.

Citizens and local businesses also stepped in with efforts to spruce up fire stations and make other improvements at the local level — from paint jobs on up.

Williams upgraded the fire prevention and training programs at the BFD as the department transitioned from paper report and inspection documents to computerized recordkeeping.

All runs are tracked by computers and times and dates automatically recorded.

“We have strove in this process to make our response time faster, and it shows in the rating that we have done it,” Crowder said. “We have accomplished where, when a call first comes in, it would take 45-50 seconds to get to us. We’ve cut that down to 17 to 15 seconds to where that call is into dispatch, and we are given the address to go to.”

Crowder said staffing has also improved, and there are enough firefighters to operate all the new equipment in an emergency. Investment in gear and advanced training have also better equipped them to do their jobs.

“All of that teamed with new trucks — when we get there we don’t have the problems we used to have of a truck not working or a truck being too old to perform the duties that we need,” Crowder said. “We have become better firefighters with all of the stuff that has been put in play.”

He also said the efforts of all fire department workers were necessary to meet the big goal.

“These guys worked their tails off to achieve this, and I want them to know that, along with God, they get all the glory because they worked hard for this,” Crowder explained.

After one year, an additional inspection of the fire department will be conducted to see that Bastrop is maintaining its standing.

“We are swinging above our weight limit, but we are providing the type of safety and fire department capabilities the people of the city need — them as well as their property,” Crowder said.

Fire District #2 in Morehouse Parish also increased in rating from a Class 5 in 2015 to a Class 4 this year.

Getting back to work – News – MetroWest Daily News, Framingham,...