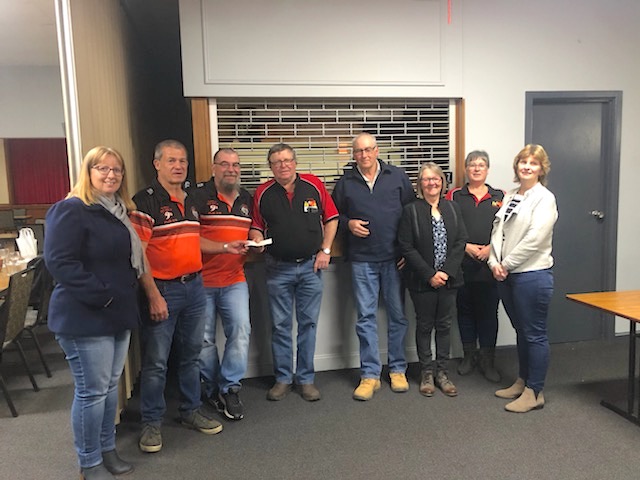 Once described an undefendable town, Batlow dealt with raging Dunns Road bushfires through THE summer and survived, only to be locked down by Covid-19.

Amid these challenges, the Batlow Tigers kept their head above water and even played some footy during the Tumut Pub 9s, all the while dealing with the devastation of some families losing homes and the town never quite being the same again.

Most recently, the hard-working Tigers committee, led by Steve Stuenkel and Larry Collins, raised $7000 for their local heroes, the Batlow RFS, in an effort to help purchase a new fire truck.

“After the fires we were allowed back in town and we all saw how well the RFS and local blokes who stayed behind did to defend the undefendable town,” Stuenkel said

“I thinking about everything the RFS had done for us and I spoke with Larry Collins at length, and I came up with this hair brained idea of the Batlow Bounce Back BBQ and Bowls Day.

“We knew we needed to help the RFS and we didn’t think they would get any help from anyone else, so we got together and raised some money.”

With the help of Batlow rugby league product and Western Suburbs Magpies star Ciriaco Mescia, the Tigers were able to raffle off NRL jerseys, with 120 people attending the event at the Batlow RSL on March 7, helping raise an incredible $7000

“We had a lot of help from Ciriaco Mescia, who helped organise Eels, St George, Roosters and West Tigers jerseys signed from all the players this year,” Stuenkel said.

“Ciriaco out of his own pocket, paid $3000 for a Bankwest stadium cooperate box but due to Covid it has not been used yet.”

Stuenkel also had help from Batlow RSL Club, who hosted the event that saw people from all other regions venturing back to Batlow.

“Kylie Boxall organised everything from entrainment to nibbles and she did a good job and some of the money spent on the day was unbelievable.”

“We had people from Gosford, Canberra and ex-locals from Sawtell; they came from everywhere.”

Stuenkel said the event had already generated some traction and would likely become an annual fundraiser for the RFS.

“We are going to do one every year and help raise money for the RFS. We need to continue to support these guys and the locals with no training, who used home-made gear and supported the RFS,” Stuenkel said.

“Our town wouldn’t be here without these guys.”

Batlow RFS Captain Darryl Watkins was thankful to the Batlow Tigers and greater community, who dug deep to help after the fires.

“It’s great to see that support from the Tigers and Batlow,” he said.

The $7000 raised by Stuenkel, Collins and the Tigers will go towards the purchase of an Isuzu Cat 7 fully equipped fire truck, valued at over $200,000.

“We don’t see a lot of funding from those guys (RFS) and we have to do a lot of fundraising ourselves,” Watkins said.

“All that money raised goes up the coast or to Sydney; we probably won’t see any of it and we need a new truck and this money helps a lot.”

Watkins also wanted to thank other major contributors, who look to have made the purchase possible.

“We should get approval today or tomorrow for the new truck, which comes back to the support from the Flemington Markets, who have raised most of the money for us, and Anne Wilkinson and Cargo Transport who donated $15,000,” Watkins said.

“The support has been incredible.”

Two Bicyclists Killed In Separate Incidents In The Bronx

Meet Twister, the pickup that survived the Father’s Day tornado at...