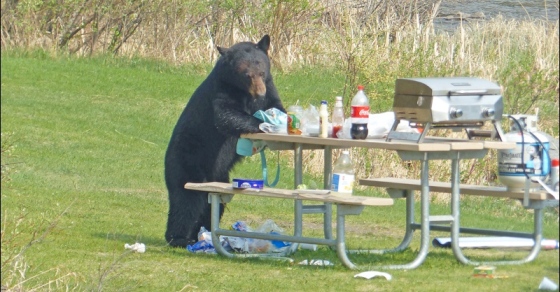 Submitted by the Sask. Ministry of the Environment

With the arrival of warmer weather, it is common to see black bears, especially young ones, on the move. They are establishing new territory, attracted to new smells and looking for food.

As long as a bear keeps moving through an area and does not show an interest in people or their property, there is no conflict. Problems start when human food is available for bears to feed on. However, bears are intelligent animals and ruled by their stomachs. They will leave an area if they cannot find food.

Bears will overcome their natural wariness of people to take advantage of the easy meals we provide when we carelessly store our food, garbage or pet food. Bears can be attracted to your property by food waste, garbage, unwashed beverage containers or recycling, pet food, bird seed and barbecue grease. Other attractants include: compost, fruit trees, berry bushes, gardens, petroleum products, animal or fish carcasses, bee hives and grain piles.

Once bears associate food with humans, they lose their natural fear of humans and tolerate them in closer proximity than what is safe – for both bears and people. When you don’t take precautions with things that attract bears, you create a safety risk for yourself and others in your community.

There are simple ways to reduce the likelihood of bears becoming a problem:

Store garbage in a secure building or use a bear-resistant container; only put your garbage out on collection day.

Remove garbage from the back of a truck, even if it has a cover.

Don’t put food out for wildlife; take bird feeders down between April and October.

Ensure all fruit and berries are picked from trees and shrubs as early as possible.

Wash all recycling items and regularly clean bins that contain garbage or recycling.

Feed pets inside or remove any uneaten pet food.

Clean barbecues after each use, including the grease trap; cover or store in a garage or shed.

Consider electric fencing for bee hives, or other attractants that cannot be kept in a secure building.

Most bears are cautious around humans, and they rarely charge or chase under normal circumstances. However, they are wild animals and can be dangerous.

The most effective way to avoid conflict is to keep bears from becoming food-conditioned and habituated to people.

Once conservation officers become aware of a habituated bear in an area, they will attempt to safely remove and relocate it. However, if the bear becomes a public safety risk, it is sometimes the safest option to put the bear down. The best way to ensure the safety of you, your community and the bear, is to remove all food sources.

In Saskatchewan, the black bear’s range includes all northern forests and extends southward into the aspen parkland, plus some isolated ranges such as the Touchwood Hills. They can also be found in valleys such as the Qu’Appelle Valley and South Saskatchewan River Valley.

For more information, including what to do if you encounter a bear and other predators, please visit saskatchewan.ca.

iN VIDEO: Fresh and local ingredients are the feature of this...