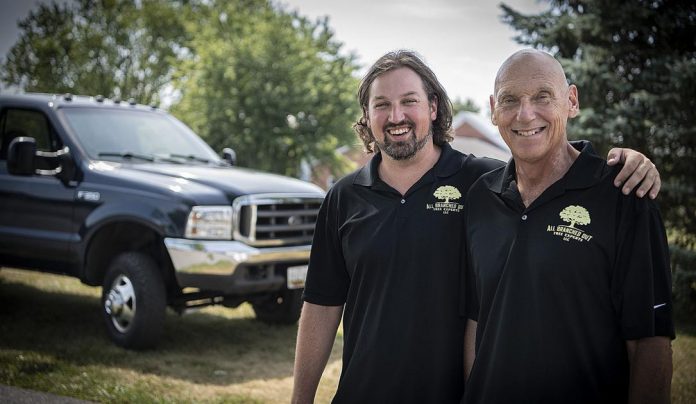 Vince Bauer speaks about his truck with the kind of love normally reserved for family and best friends.

There is a swoon in his voice and hearts seem ready to pop out of his eyes.

“It has this amazing feel,” said Bauer, a 60-year-old Walkersville resident who recently beat throat cancer. “It has this low-end torque. It just makes you feel like a man when you are driving it.”

“That was a steal,” said Bauer, who promptly sold his 2015 Chevy pickup with considerable less wear and tear to make room for his newly prized purchase.

The selling point for the Ford truck was its renowned 7.3-liter power stroke diesel engine that is considered indestructible in some auto circles. This engine was discontinued in 2003 to meet stricter emission regulations.

“It’s quite a piece of machinery,” Bauer gushed.

On Monday, Bauer had it purring once again after picking up his truck from Mark’s Equipment Service in Frederick, where it was made to look brand new again. The hood and the tailgate were replaced and it was completely repainted. There were no more dings, dents or rust.

“Are you kidding me?” Bauer bellowed to his son, Josh, as they pulled up to Mark’s and he saw the refurbished truck for the first time.

The renewal work on the truck was a surprise to Bauer. He thought it was simply in the shop for standard repairs since it logs a lot of miles for the family-owned tree service company, All Branched Out.

As a token of gratitude for his years of service at the company and to celebrate his recent completion of a 14-week cancer treatment program, Bauer’s family arranged to refurbish his beloved truck, a personal vehicle he graciously offered up for company use right after he bought it.

In fact, he hasn’t had the chance to drive it very much because it’s usually in service with one of his employees and his treatment has kept him away from the job.

Having recently returned to work, Bauer started grumbling about the whereabouts of the truck on Monday, and it became impossible to keep the surprise under wraps any longer.

“The paint on this thing is ridiculous,” he said upon examination of his new-look truck. “It is stunning, especially if the sun hits it a certain way.”

Bauer was not a prime candidate for throat cancer.

A former wide receiver for the University of Maryland, he is still a regular at the gym. He doesn’t smoke or chew tobacco. He leads a social and active lifestyle both at work and during his free time.

In February, right before the coronavirus became a pandemic, Bauer started complaining about discomfort in his mouth. He thought he might need a root canal.

After a trip to the dentist failed to identify the problem, he was referred to an ear-nose-and-throat specialist, who quickly discovered the issue.

Through personal connections, Bauer began working with a highly specialized team at Johns Hopkins Hospital in Baltimore that recommended an aggressive treatment plan for his stage 1 throat cancer.

“As you can imagine, you can’t help but think the worst,” his son, Josh, said. “You go through a roller coaster of emotions. But, fortunately, my dad was being treated by an outstanding team of doctors. And it was caught fairly early. So, right off the bat, we knew there was like a 90-95 percent recovery rate. That helped to put our minds at ease.”

Over the course of 14 weeks of intense chemotherapy and radiation, almost 50 pounds fell off of Bauer’s 6-foot-3 frame and he became physically weak.

His girlfriend, Debra, and personal friend, DeAnna, a nutritionist, put together a diet for him to follow. But he quickly lost taste for most foods. At times, he felt like he was chewing on sand.

The final three works were the worst, as his doctors had warned. The muscles in his throat atrophied to the point where it became difficult for him to swallow food or water. He eventually had a feeding tube inserted through his nose.

“It took a huge village to get me through this,” Vince Bauer said. “I am just so grateful to my family, friends, doctors and all of the people that helped me and kept my spirits up. I wouldn’t be here without them.”

Bauer estimated that he is 75 percent of his normal self. His taste for food has been slow to return. But, just this week, he nudged back over 200 pounds.

He normally weighs around 215. He had intentionally gone up to 231 prior to the start of treatment before falling all the way to 185.

One of his most recent thrills was climbing into the driver’s seat of his truck and turning the key in the ignition.

Asked to describe that feeling, he said, “Just total happiness.”