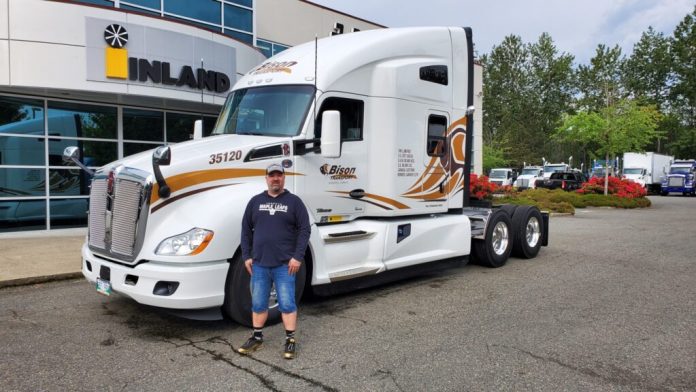 TORONTO, Ont. – When Roger Mansfield turned 40 last year, he
decided the time was right to pursue his dream of becoming an owner-operator.

In January, he got the ball rolling, incorporating his business,
doing a business name search, and assembling the paperwork. He was ready to launch
his career as an owner-operator this Spring. Then Covid-19 hit.

“When the pandemic hit in March, I already had one foot in
the door,” Mansfield told Today’s Trucking. “When the shutdown became
official, I was literally just about to buy the truck. I was ready to go. I
decided to put it off for about three weeks, just to see where freight volumes
were going.”

After putting his dream on hold for a few weeks, Mansfield
decided to take the plunge. The Bison Transport company driver was planning to
lease on with the same company, and was assured freight would be steady due to
its diverse freight network.

“It’s a strange time to buy a truck,” Mansfield admitted while
doing a reset in his Kenworth T-680. “A lot of people can’t believe I did that.”

But it can also be a good time to buy a truck. All truck
manufacturers are offering attractive incentives to kickstart sales. They range
from deferred initial payments, to reduced costs on extended warranty packages,
to relaxed down payment requirements. Postponing his truck purchase allowed Mansfield
to tap into some of those incentives.

“When I bought it was the end of May and it was definitely a
buyer’s market,” he said. “A lot of (OEMs) are offering cash-back incentives,
down payment allowances, free chassis warranty – all of them have some sort of
deferral on the first payment to give you a little cushion there.”

Dealers are also sitting on a backlog of 2020 model year
trucks they are eager to move to make way for 2021 models. Mansfield opted for
a 2020 T-680, still brand new, “so it’s definitely an opportunity to get a
really good deal, which is important because over the last couple years it’s
been really difficult to buy a truck outright just because of the Canadian dollar.”

Mansfield leased on with Bison, a company he was already
familiar with having worked for them as a company driver. But for those looking
to strike out under their own authority, the path is much more difficult. Most
insurance providers now refuse to take on new operations. This can be a rude
awakening for aspiring busines owners.

“If they really want to start their own business, they need to be an owner-operator contracted to a fleet (to get insurance),” warned Rod Stiller, president of broker National Truck League. “That’s the unfortunate news. I know it doesn’t go along with the entrepreneurial spirit but most of the insurance companies that will write a new venture want to see they’ve been incorporated for three years, have had their CVOR for a few years, that they had some kind of fleet experience with the same equipment configuration and radius.”

Stiller’s advice to owner-operators who eventually want to
operate independently, is to first lease on with a fleet that runs the same
lanes and commodities.

“If someone runs three years in Canada as an owner-operator
for a domestic fleet, it will not help them get insurance if they want to start
crossing the border under their own authority,” he said. “It’s very difficult
and it has been getting tighter and tighter over the last couple years.”

Some owner-operators may turn to facility insurance, a
government-backed insurance of last resort, but Stiller said the premiums are
generally too high to be feasible for a new venture.

“I have talked to owner-operators who say ‘Hey, I bought a
truck, I’m ready to go,’ and we give them a facility quote and they can’t even
make sense of that. We suggest they contract with a reputable fleet,” said
Stiller.

Lisa Arseneau, commercial producer with Staebler Insurance,
has also had to disappoint new owner-operators who purchased a truck only to
find they couldn’t get insurance for their new venture. She too suggests they
lease on with a reputable fleet.

She suggests asking a few questions of the fleet, including: Is the fleet policy deductible? Is the premium contributory by the fleet, or borne solely by the owner-op? Is deductible buy-down available? Does the fleet have a WSIB alternative insurance program?

Mansfield said the benefit of signing on with a fleet is the insurance is bundled with other fees, including: permitting; plates; fuel cards, etc., so it’s a steady, predictable single deduction. Also, signing with a safe fleet ensures the owner-operator gets the benefit of the lower premiums they’ve earned through their overall fleet safety performance.

“Their insurance costs are lower and they get kicked down to
their owner-operators,” he noted. “I couldn’t imagine doing it on my own.”

Joanne Ritchie, executive director of the Owner-Operator
Business Association of Canada, urged owner-operators to lease on with a
carrier that will treat them as a valued business partner.

“I would say the prohibitive cost of insurance is probably
the single biggest reason why the most common business model for
owner-operators in Canada is to work under a carrier’s plates and insurance.
All the more reason to have a rock-solid business contract with a carrier who
sees the owner-operator as a business partner,” she said.

“I would never advise anyone to take the plunge until they’ve had a couple of years out on the road as a company driver under their belt.”

She also urged prospective owner-ops to avoid the temptation
of buying a new truck just because of attractive incentives currently on offer.

“I would never advise anyone to take the plunge until they’ve
had a couple of years out on the road as a company driver under their belt,”
she said. “They need to have a good understanding of how trucking works behind
the wheel on a day-to-day basis. They also need to have good overall knowledge
of the trucking industry – rates, capacity, etc. – especially in this climate.
And a good knowledge of the economy in general and how trucking fits in is especially
important if they are going to be starting up a small busines.”

A lack of business skills is one of the leading contributors
to an owner-operator’s demise, Ritchie warned.

“Understanding their costs, then ensuring revenue covers these
costs and leaves them a profit is the only way it will work,” she said.

For Mansfield, life on the road is different as an owner-operator.
Instead of spending his resets watching Netflix, he’s updating his books and climbing
under the truck with a grease gun. Owning the truck has also affected how he
drives.

“It’s a different ballgame. You don’t realize how much differently you drive, how much more conservative you are with your own truck, how much you pay attention to fuel prices.” But, the fledgling owner-operator has no regrets about taking the plunge and starting his own business, even in the midst of a global pandemic. “So far, it has gone pretty smoothly,” he said.

Two ejected from vehicle in rollover on Mooresville Pike – News...