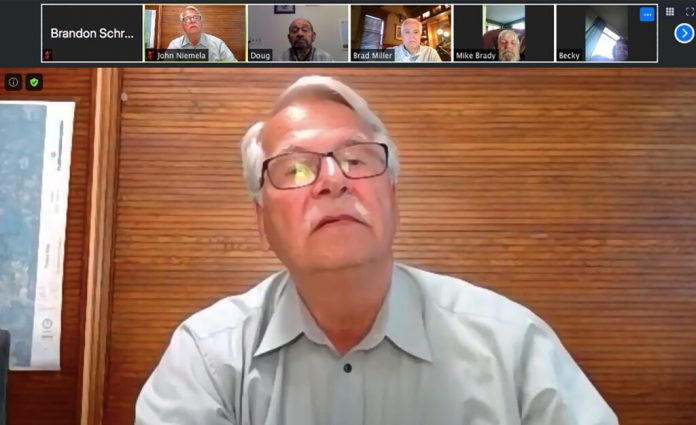 BELDING — The Belding City Council is extending its purchase and sale agreement with Rite Aid for the third time.

Last fall, the Belding City Council approved a purchase agreement with MCV Properties, on behalf of Rite Aid, for $30,000 so that Rite Aid could potentially relocate from inside the Covered Village Mall to the Breimayer lot.

Included in the purchase agreement was a 180 study-period to allow the company to examine the lot and determine whether or not it would be a good fit for a new building.

In March, the City Council was asked to grant Rite Aid an additional 90 days for their study, pushing the new date out to May 15.

In May, however, the City Council was asked to grant Rite Aid a second 90-day extension due to various issues caused by the coronavirus pandemic.

“(The company) is still kind of in a holding pattern with their approval processes for new construction,” Niemela explained. “They did indicate that they’re just now starting to bring some of their projects back towards the committee that approves projects. They’ve been sidetracked because of COVID-19 and are just now starting to get back on track.”

The new extension would give Rite Aid until November 30 to complete their study — a date that’s over a year after when the matter was first brought to the council’s attention.

Councilman Jorel Davis asked whether there was any reason to believe the deal wouldn’t be moving forward.

“They’ve been encouraging that they are moving forward, actually,” Niemela answered.

“And there hasn’t been anything that’s changed as far as the property value or anything like that since October 3?” Davis questioned, which Niemela said was correct.

Councilman Bruce Meyers commented on the multiple extension requests and further asked if that should be cause for concern.

“I just find it concerning that this continues to go on and on,” Meyers noted. “I don’t know how in-depth of having conversations we are having with them, so, I guess, what is it they’re actually saying to you, John, that makes you believe this is something that’s actually going to happen?”

“The conversations that we’ve had, they’re based on reassurances that they’re moving forward on this project,” Niemela responded. “They’re confident that, once the corporate folks get back on track on reviewing requests for new construction, it’ll move forward.”

“And you believe the Belding site is one of the ones on the top once they get rolling?” Meyers continued to ask. “Or are we just in the mix of many, many, many of them.”

Niemela said he was unsure if Belding was first on the list of Rite Aid’s agenda or not, as he was only told the city was “in the mix.”

“At one particular point, I was on the phone with Rite Aid as well with John,” Mayor Brad Miller added. “They were very confident in the Belding location. I think some of the things they’re stressed with right now are the same things that a lot of major companies are dealing with — COVID, obviously, as well as funding the property and expansion. There are a lot of things to take care of right now, I think is the best way to put it.

“What was interesting is that the gentlemen we spoke to from Rite Aid — I don’t want to say pompous, necessarily, but he said he was somebody who makes sure that these deals go through and he was very confident in reassuring us this one would.”

During last week’s meeting, the Belding City Council also approved the start of the process to purchase a new fire truck by obtaining bids and seeking a funding source.

“We have not purchased a new truck in over 16 years,” Lubitz wrote in a letter to council members. “The truck that we are looking at replacing is over 26 years old. Our other trucks are 27, 28 and 18 (ladder) years old. If we purchase a new truck now, and we purchase another in five years (that will make the replaced truck 32-years-old) and replace the ladder in 15 years from now (10 years after the other, making it 33-years-old at that time), we will be very lucky to not have problems with them.”

In total, Lubitz estimates a new truck will cost approximately $610,000.

“We are currently looking at (Rural Development Authority) for our funding source,” his letter reads. “They also have grants that we want to pursue, if we qualify, but nothing can be sought after until we have an amount and proceed with the truck purchase.”

Meyers asked about the extrication equipment included in Lubitz’s request.

“When you purchase a truck, it’s normal for people to add many different items, depending on what’s needed,” Lubitz explained. “The extrication equipment we currently have is stuff that was here back when (Councilman Douglas Feehan) was chief, meaning it’s well over 25-years-old. It’s very outdated and we’re looking to replace it with more current equipment.”

Council members unanimously approved Lubitz’s request to begin obtaining bids from at least three manufacturers and to start the search of a funding source.

Once the fire department receives the bids, Lubitz and Niemela will review them and return to the City Council with a recommended manufacturer to proceed with.

Sudbury family speaks out as public health officials warn about another...