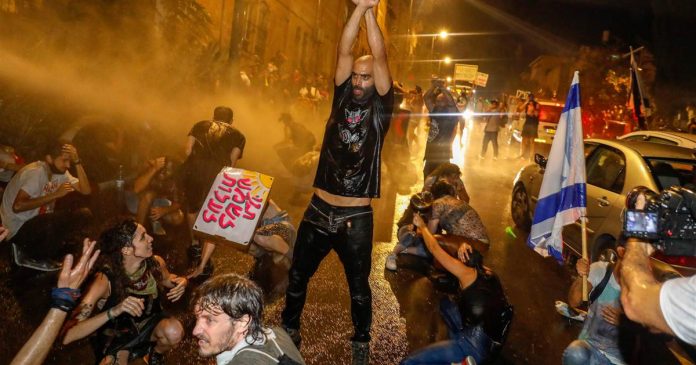 TEL AVIV, Israel — Israeli Prime Minister Benjamin Netanyahu’s corruption trial resumed on Sunday after a break of more than a month, as mounting protests continued over his handling of Israel’s coronavirus crisis.

The trial will officially resume in January with witnesses being heard three times a week, the court decided Sunday.

Lawyers for the Israeli leader asked for a six-month postponement to prepare their strategy. They suggested it would be difficult to gauge the truthfulness of witnesses wearing masks — currently compulsory in Israel.

Netanyahu, 70, was not required to attend Sunday’s session in Jerusalem District Court, where he appeared on May 24 at the opening of the trial.

The first serving Israeli prime minister to go on trial, Netenyahu was indicted in November and has been charged with one count of bribery and three counts of fraud and breach of trust in three long-running corruption cases.

He denies any wrongdoing and says he is the victim of a politically orchestrated “witch hunt.”

If convicted, Netanyahu could face up to 10 years in prison for bribery and a maximum three-year term for each count of fraud and breach of trust. However, legal experts have suggested it is unlikely he would be handed maximum sentences even if found guilty.

The trial resumed after another night of protests in Israeli cities as public anger mounted about high unemployment and frustration at the government’s response to the pandemic.

In Tel Aviv, Israel’s commercial hub, thousands gathered to demand better state aid to businesses hurt in the pandemic. Hundreds of police were stationed at both demonstrations as protests from the previous weekend had turned violent.

At a protest on Saturday in the city’s Charles Clore Park, police in riot gear stormed the rally, removing hundreds of protesters by truck, according to a police spokesman.

After coronavirus cases soared in recent weeks, Israel reimposed sweeping restrictions Friday. It had largely contained its outbreak by late May, but the government said Friday that gyms and exercise studios will be shuttered to the public and stores, and beauty salons, museums and tourist attractions would close on the weekends.

The restrictions have battered the economy and sent unemployment skyrocketing to more than 20 percent, up from 3.9 percent before the outbreak, according to the Associated Press. With a population of around 8.6 million, Israel has reported nearly 50,000 virus cases since the start of the pandemic with more than 400 deaths as of Sunday. There are currently around 28,000 active patients.

Netanyahu addressed his cabinet on Sunday about a billion-dollar framework to approve grants for citizens of Israel in order to spur the economy, according to a government adviser.

Paul Goldman is a Tel Aviv-based producer and video editor for NBC News.