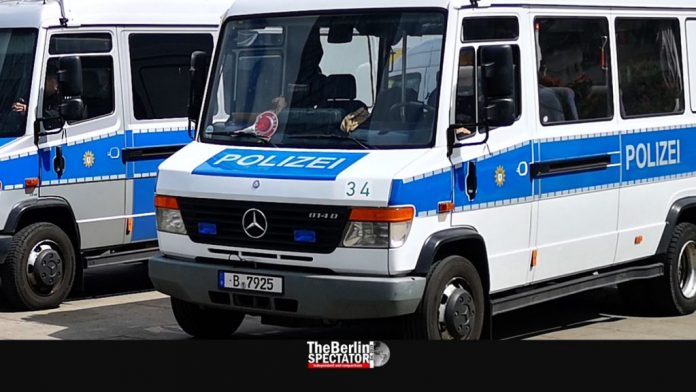 At Berlin’s Bundesplatz, a square in the Wilmersdorf district, at least three gangsters mugged a bank on Tuesday morning. One person was shot and injured.

Today’s bank heist on a ‘Volksbank’ branch at ‘Bundesplatz’ took place at around 9:30 a.m. CEDT this morning. At 9:37 a.m., a caller alarmed the fire department because of a burning vehicle on ‘Detmolder Strasse’. Once they were on site with their colleagues from the Berlin Police Department, it turned out the fire was caused by gangsters. The vehicle reportedly was theirs. They set it on fire on purpose.

When the culprits entered the bank, they were approached by two security guards. The gangsters fired shots and injured one of the guards. His injuries are not life-threatening, according to German-language media. The victim sustained a bullet wound.

Twenty firefighter were at the crime scene in the late morning. So were police officers, including an elite unit with machine guns. Police investigators were interviewing witnesses. Other officers blocked ‘Bundesallee’, a major street, in its southern direction. ‘Detmolder Strasse’ is closed in the area around ‘Bundesplatz’. The Police Department asked Berliners to bypass the entire area.

At first, media had reported a cash truck had been mugged. Then it turned out it was the bank itself. Whether the robbery was successful is unclear at this stage.

It is not the first time a crime of this kind takes place in that area. On June 16th, gangsters managed to steal a suitcase full of cash from a security guard, who was going to take the money to the very same ‘Volksbank’ branch. They reportedly managed to flee with roughly half a million Euro. That spot seems to be the first choice for robbers, maybe because it is easy to get away from there.

On Friday of last week, gangsters had tried tried to steal a cash bag from a guard at a ‘Postbank’ branch inside a department store at Berlin’s ‘Hermannplatz’, a square between ‘Kreuzberg’ and ‘Neukölln’. In this case they were not successful, meaning they left the crime scene without prey.

By the way: The publication you are reading, The Berlin Spectator, was established in January of 2019. We have worked a whole lot, as you can see. But there has hardly been any income. This is something we urgently need to change. Would you consider contributing? We would be very thankful. Our donations page can be found here.