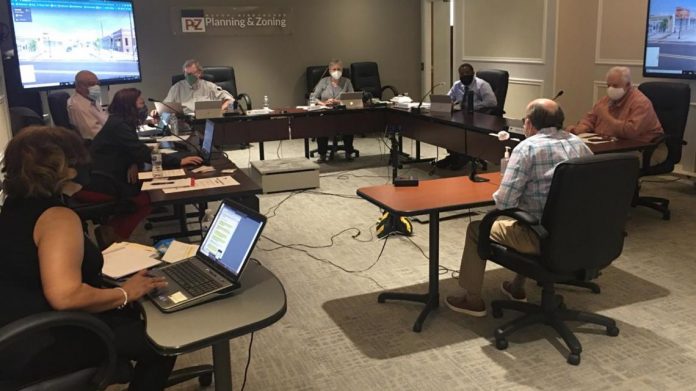 MACON, Ga. — The Macon-Bibb County Planning and Zoning Commission approved a new hotel for downtown Macon and construction of two convenience stores but balked at the idea of a new nursery in a north Macon neighborhood.

During its Monday meeting, downtown Macon resident Stella Tsai phoned in her concerns about the planned Avid 87-room hotel at 567 Second St. between Poplar and Plum streets.

Tsai, who lives in a nearby condominium, is worried about additional traffic on Poplar Street Lane, which will serve as the entrance to the hotel.

She accesses her parking along First Street Lane from Poplar Street Lane.

“You can barely fit one car,” Tsai said.

Hotel developer John Crow explained that vehicles would flow in one direction around the hotel and he did not anticipate much guest traffic and only a laundry truck “from time to time.”

Tsai also questioned what the target audience would be.

Crow explained they anticipate serving healthcare-related clients from Navicent Health and those people who might be visiting downtown for entertainment options.

“We don’t expect a rowdy crowd. We don’t even have a bar,” Crow said.

Planning and zoning commissioners were concerned that only 44 parking spaces will be built with the hotel, but land owner Tim Thornton said there is overflow parking available nearby on one of his other lots.

Thornton said he still hopes to build a parking deck and a Hyatt Place hotel nearby as part of the Central City Commons project that could revitalize the whole block.

Commissioners signed off on the hotel design and the conditional use of the space. Construction is expected to begin by the end of this year.

They also approved amended changes in the design for an outparcel in the Lofts at Zebulon at 5791 Zebulon Road. Summit Design & Build agreed to draft a plan similar to the design approved by P&Z last year.

Five Rivers Investments LLC received approval for a new 24-hour convenience store at 5387 Hawkinsville Road across from Kumho Parkway. The store will also cater to large trucks by providing diesel pumps and designated bathrooms at the rear of the building.

Commissioners approved Tejas Properties’ plans to demolish the front half of a convenience store built in 1986 at 6398 Zebulon Road near the entrance to Lake Wildwood. The company will build a new store on the site with a larger gas pumping area and additional parking.

Commissioners also approved the demolition of a Verizon Wireless cell phone tower at 1358 Old Forsyth Road and erection of a new one that is structurally capable of supporting equipment for additional coverage and capacity.

The commission also approved a new garage at 162 Corbin Avenue, vents to be added to a home at 218 Orange St. and construction of a pool shelter in a new landscaping design for 925 Park Place in downtown.

When considering plans to move Agape Nursery from its fire-damaged location on Mumford Road to 6225 Forsyth Road, Commissioner Tim Jones raised concerns about how the business would affect nearby neighbors whose property lines back up to the site.

“You’re cutting it kind of close,” Jones told Victor Davidson, who must relocate his business by the end of the month.

Commissioners agreed to defer the matter to the July 27 meeting to allow signs to be posted on the property to alert the Aston Hall neighbors of the potential that a nursery with its landscaping business could be moving in.

If no one objects, the commission is expected to approve the conditional use application for the project.