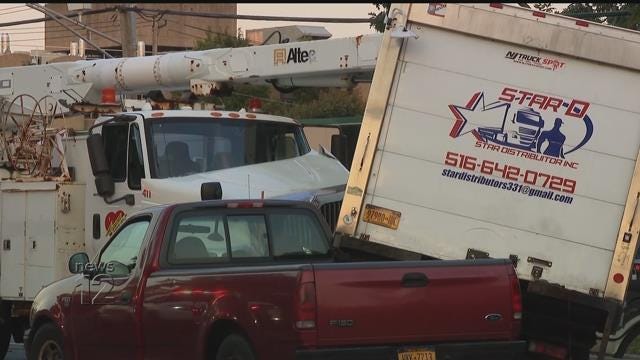 A bicyclist was killed in a crash involving an out-of-state utility truck in Garden City Friday, police say.

Police say the truck slammed into seven vehicles on Stewart Avenue in Garden City, including a box truck.

The utility truck tore part of the roof off the box truck and a red pick-up truck ended up crushed against the box truck.

Investigators say the driver of the utility truck – 33-year-old Matthew Mummaw, from Jacksonville, Florida – has been arrested and charged with manslaughter, driving while ability impaired, leaving the scene and reckless endangerment.

Police say the suspect will be arraigned when medically possible.

According to officials with PSEG Long Island, Mummaw was an out-of-state contractor brought in to help with the power restoration from Tropical Storm Isaias.

The power restoration crew involved in the collision was working for a company called Heart Utilities of Jax, based in Jacksonville, Florida. News 12 is told their work had been completed prior to the incident, and they were no longer being contracted by PSEG when the crash happened.

News 12 has reached out to Heart Utilities for a comment but so far has not heard back.

One man told News 12 that the busy intersection near Merchant Concourse can be dangerous, especially for pedestrians and cyclists.

“It’s dangerous to ride a bicycle on this road,” the man says. “At least crossing over because the amount of traffic.”

The identity of the bicyclist who was killed has not been released.

Woman dies after being struck by pickup