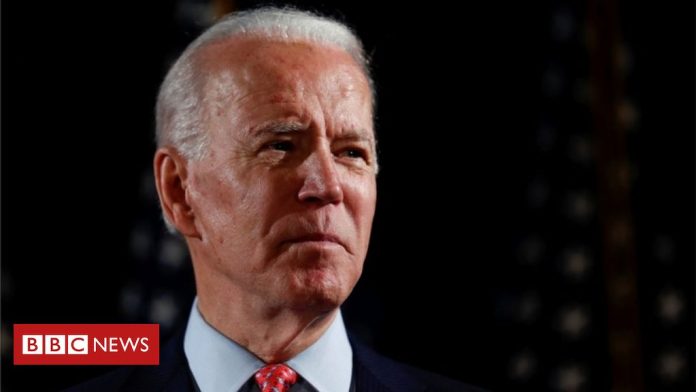 The Democrats’ likely presidential candidate Joe Biden has demanded justice over the killing of an unarmed black man in the US state of Georgia.

Mr Biden said his heart went out to the family of Ahmaud Arbery.

Mr Arbery, 25, was jogging in February when confronted by an ex-policeman and his son. Video purported to show the shooting emerged online on Tuesday.

A district attorney in Georgia has now ruled that a grand jury should decide whether charges should be brought.

An earlier decision by a prosecutor in the Brunswick jurisdiction argued there was no probable cause to arrest Gregory McMichael, 64, and his son Travis, 34, the New York Times has reported.

How did Arbery die?

Mr Arbery was out running in the Satilla Shores neighbourhood of Brunswick in Georgia’s Glynn County early in the afternoon on 23 February.

In a police report, Gregory McMichael says he saw Mr Arbery and believed he resembled the suspect in a series of break-ins.

He and his son armed themselves and pursued him in a pick-up truck.

In the police report, Gregory McMichael says he and his son had said “stop, stop, we want to talk to you” and that Mr Arbery had attacked his son. Shots were fired, with Mr Arbery falling to the street.

Mr Arbery’s mother, Wanda Cooper, said police told her her son had been involved in a burglary before the incident, but the family say they do not believe the keen jogger had committed a crime and he was unarmed.

What does the video show?

It was initially posted on a local radio station website but was then taken down.

But CNN included the video in its report of the story.

However, it said it did not know who recorded the footage and could not independently confirm its authenticity.

The 36-second video is shot from a vehicle following the pick-up truck said to be involved in the incident.

It shows a man jogging and then approaching the stationary pick-up from behind. He tries to bypass the truck and then is seen struggling with a man carrying a shotgun. There is muffled shouting and shotgun shots are heard.

A second man is standing in the bed of the pick-up. The second man is then shown with a pistol standing alongside the other armed man with the jogger no longer in view.

Although not shown in its video, CNN says that after a third gunshot the jogger recoils and blood appears on his T-shirt below his ribcage.

What have Mr Biden and other officials said?

Joe Biden sent out a tweet saying: “The video is clear: Ahmaud Arbery was killed in cold blood. My heart goes out to his family, who deserve justice and deserve it now. It is time for a swift, full, and transparent investigation into his murder.”

A statement from Lee Merritt, a lawyer for Mr Arbery’s family, said: “This is murder. The series of events captured in this video confirm what all the evidence indicated prior to its release.”

Tom Durden, the district attorney for the Atlantic Judicial Circuit, decided on Tuesday that a grand jury should be involved.

“After careful review of the evidence,” he wrote in a statement, “I am of the opinion that the case should be presented to the grand jury of Glynn County for consideration of criminal charges.”

The McMichaels have not been charged and have not so far responded to the video. CNN said Gregory McMichael had earlier told it he would not be commenting.

The New York Times said it had obtained a letter in which a prosecutor had earlier argued there was not sufficient probable cause for arrest because the pursuers were legally carrying firearms, were within their rights to follow “a burglary suspect” and were able as private persons to “arrest an offender if the offence is committed in his presence or within his immediate knowledge”.

Hyundai’s Cool New Compact Pickup Is Less Than 2 Years Away...