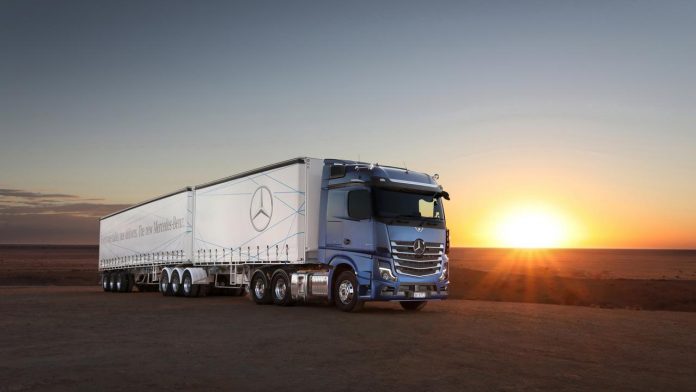 THE new Mercedes-Benz Actros has become the first vehicle in Australia to use cameras instead of side mirrors.

Normally, prestige cars introduce the newest whiz-bang features and they filter down to other cars and then to trucks, but it’s different this time around.

Not one car, not even a Tesla or a Merc, has replaced side mirrors with cameras yet.

Mercedes-Benz reckons the MirrorCam feature will save fuel due to reduced drag, which makes sense given the size of the regular mirrors, but also bring a safety benefit due to the improved vision for drivers that comes with removing a decent obstruction. This is especially evident when you try to turn left at an intersection or come up to a roundabout. The footage from the camera wings is shown on 15-inch vertical screens mounted on the inside of the A-pillars.

The cameras, which Mercedes-Benz says offer improved vision at night and in the rain, are mounted on flexible wings that can bend. The company says that, if smashed, repairs cost no more than traditional mirrors.

But Mercedes-Benz understands that not all drivers are ready to wave goodbye to their traditional mirrors and have decided to offer MirrorCam as an option rather than making it standard.

MirrorCam is the headline grabber for the new Actros, which is available at Daimler Trucks dealerships across the country after a validation program with key customers, but it’s not the only upgrade for the truck that arrived in Australia in late 2016.

The new model features Predictive Powertrain Control, which uses topographic map data to help the truck anticipate terrain and select the best shift pattern and engine response for maximum fuel economy on cruise control. Armed with this GPS-derived data, the truck is able to make the best, and most economical, choice of throttle application and gear selection. The idea is that on steep hills, ahead of a hilltop, coasting down a hill, in dips or on the flat, PPC recognises impending driving situations in good time and takes anticipatory action. This could mean holding on to a gear, rather than changing up, just before the crest of the hill, or briefly selecting neutral to save fuel in the appropriate conditions.

Mercedes-Benz is confident this feature will deliver fuel savings, as will the optional MirrorCam.

“The existing Actros has been great on fuel, but the new one is even better,” says Mercedes-Benz Trucks Australia Pacific director Andrew Assimo.

“That’s certainly the message we’ve been receiving from our validation fleet participants, with and without MirrorCam,” he says.

Up to 12 inches in size (10-inch is standard), the screens present information in super-sharp detail.

One replaces the traditional sat-nav/radio screen and is a touchscreen unit, but has traditional buttons for important things like climate control and radio volume across the bottom. It still hosts the radio controls and the sat-nav, but you can also see and control pretty much everything in the truck.

Mercedes-Benz is also validating a system that would enable third party apps to be installed from its customers.

The other screen replaces the traditional instrument cluster behind the steering wheel and shows the truck speed and engine rpm in addition to a section in the middle that can be used to scroll through to check key truck information.

There is no traditional key ignition slot in the Actros cab. The key can stay in the driver’s pocket and all they need do is press the Start button.

Also new in the Actros cab is the electronic park brake.

Customers can order the Actros with the regular sleeper or choose an option called SoloStar, which is a different approach to the concept of resting in the cab.

By moving to a fold-down bed instead of a permanent bed, there is ample space for a driver to spread out during rest breaks or before bed using the cafe style lounge seat which is positioned at the back of the cab on the passenger side.

The idea is to create more usable space for the driver during the day. When it is time to sleep, the driver’s seat is pushed forward and the passenger seat-back folded forward to allow for the drop down bed, which features an 850mm-wide mattress.

Other improvements include the latest generation Active Brake Assist 5 safety tech, which can brake the truck in the event the driver, for whatever reason, doesn’t react quickly enough. It has been standard in the big Benz trucks for 10 years now. The radar system also enables the truck to partly drive itself, automatically speeding up and slowing down in heavy traffic, although the driver still needs to steer the truck.

Mercedes-Benz has left the engine and transmission hardware unchanged. Engine options include 8-litre and 11-litre units as well as the OM 471 13-litre and OM 473 16-litre for the bigger jobs. The 13-litre unit output ranges from 510hp to 530hp, while the 16-litre is rated between 580hp and 630hp.

The new Actros continues to use the PowerShift 3 Automated Manual Transmission units that were introduced locally in 2016. These include 8-speed, 12-speed and 16-speed options.

Mercedes-Benz is launching the new Actros with a complimentary Bets Basic service plan that applies for five years or 500,000km, whichever comes first.