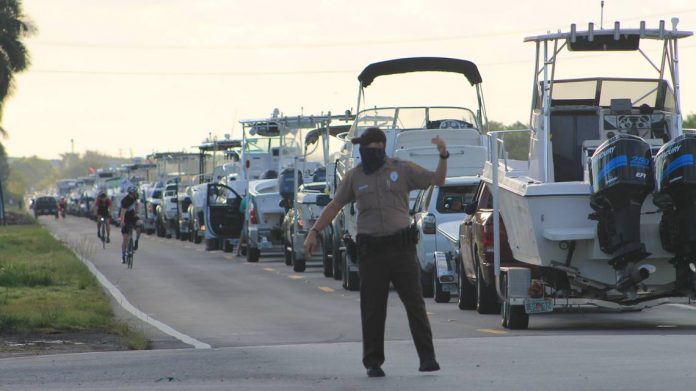 Less than 30 minutes after receiving a coronavirus antibody test, 32-year-old Ryan Rea paddled out onto Biscayne Bay with a friend.

Rea, who lives in downtown Miami, drove to Maurice Gibb Memorial Park in Miami Beach because marinas in the city remain closed. He has paddleboarded in recent weeks by dragging his gear to Bayfront Park and climbing down a rocky sea wall.

“I’m ready to get back out there,” said Rea, who was tested for antibodies at MedRite Urgent Care in MIami Beach around noon. “I’m just happy to be back out on the water.”

Stuck at home for the past six weeks, Miamians stepped out of their quarantine cages on Saturday for the first weekend after parks and marinas reopened.

Beaches remain closed in Miami-Dade County, but groups sunbathed in parks and on the side of busy roads, while high demand for access to the ocean forced some marinas to turn boaters away. Social distancing was difficult for the bicyclists and joggers who exercised on the Venetian Causeway, especially when tall boats forced up a drawbridge and brought everyone to a standstill.

For many enjoying the county’s parks and marinas, the loosening of coronavirus-related emergency orders signaled a return to some type of normalcy, although larger sectors of ordinary life — like retail stores, movie theatres and hair salons — have yet to be scheduled to go back online.

Reggaeton music blasted from a nearby speaker as a local artist recorded a music video along the sea wall. In between takes, park rangers instructed Henry Laso El Encuyé and his back-up dancer to wear a face mask.

“If everyone has masks, what difference does it make?” he said.

Douglas Correoso, who is directing the video for the song — titled “Vete,” which translates to “get out,” — said it was difficult to film a party song during a pandemic.

“It’s hard because of the situation,” he said. “We have to keep smiling.”

More than 1,550 face-mask warnings have been issued at Miami Beach parks and open spaces in the first two days the parks were reopened. Many park goers at South Pointe did not wear masks Saturday. City Manager Jimmy Morales said in a memo Saturday that if “serious compliance issues” continue there, he will “likely close it again on Monday.”

Along the Julia Tuttle Causeway, in between Miami Beach and the mainland, Florida Highway Patrol troopers cleared out crowds that had parked their cars by the dozen on the shoulder of the highway to enjoy the bayside views and go fishing.

Some residents have asked the city to reopen its beaches, perhaps only to those living on Miami Beach. The City Commission rejected a plan Friday to ask that Miami-Dade County Mayor Carlos Gimenez reopen the city’s beaches.

“It’s not a privilege,” Misik, a Miami Beach resident, said. “It’s a regular type of life.”

Commissioner Ricky Arriola, who proposed the limited reopening, said residents have been “cooped up for six weeks” and ready to go outside.

“It’s about time local government treated people with trust and respect and allow them to enjoy our great outdoors,” he said. “Our residents’ mental, spiritual and physical health depends on it.”

At Blackpoint Marina in South Dade hundreds of cars and trucks hauling boats, some lined up since dawn, were turned away because the marina reached capacity before noon.

People started camping out on the road Friday night around 10 for a chance to be among the first to be let into the marina when it opened at 6 a.m. to launch their boat after not being able to for the past six weeks. Marinas were among the list of public spaces closed by Miami-Dade County because of the novel coronavirus pandemic.

But many didn’t get the chance. The county-operated marina’s parking lot was full by around 10 a.m., said Miami-Dade police officers staffing a roadblock.

On Wednesday, the county opened its marinas and parks, which saw steady crowds, but nothing like those on Friday when Blackpoint became so overwhelmed with people trying to launch their boats from one of its four ramps that the marina had to close hours after opening.

Most of those waiting in line Saturday seemed to be willing to endure the hours of sitting in their vehicles for a chance to go boating and fishing after weeks of being confined on land and mostly indoors.

Emily Sandoval, her husband, Alvaro, and their three kids were among the hundreds waiting in their cars to get into Blackpoint Marina. At 8 a.m., they had already been waiting in line since around 5:30 a.m. and still had more than 100 cars and trucks towing boats ahead of them. But they just bought their boat Friday so they were eager to get out on the water.

“This would be our first time, so for us, it’s definitely worth the wait,” Sandoval said.

Leandro Acosta was standing outside his friend’s truck because the line was not moving. It’s been about seven months since he was last on a boat, so he and his group were willing to wait in the line. But he worried how long they would have to wait to launch their boat from the ramp once they got inside the marina.

“It’s been at least three to four hours to go in, I don’t know how it’s going to be to go out,” Acosta said.

A Miami-Dade police officer directing traffic said the marina parking lot has capacity for 185 trailered boats. The marina was letting 10 vehicles in at a time, and two at a time to use one of the four ramps once on the property.

“We’re just here to make sure there are no fights and everything is good,” the officer said.

Livan Cordosa, his two cousins and a friend arrived on 248th Street around 5:40 a.m. They were excited to go fishing, and the long line did not discourage them.

“We were waiting for a couple of months, so for us it was worth it,” Cordosa said. “We wanted to come Wednesday, but we were working.”

Martin Vassolo covers the politics and government of Miami Beach for the Miami Herald. He began working for the Herald in January 2018 after attending the University of Florida, where he served as the editor-in-chief of The Independent Florida Alligator. Previously, he was a general assignment reporter on the Herald’s metro desk and a political reporting intern.

David Goodhue covers the Florida Keys and South Florida for FLKeysNews.com and the Miami Herald. Before joining the Herald, he covered Congress, the Environmental Protection Agency and the Department of Energy in Washington, D.C. He is a graduate of the University of Delaware.

Trump to release guidelines for phased-in re-opening of U.S. economy |...