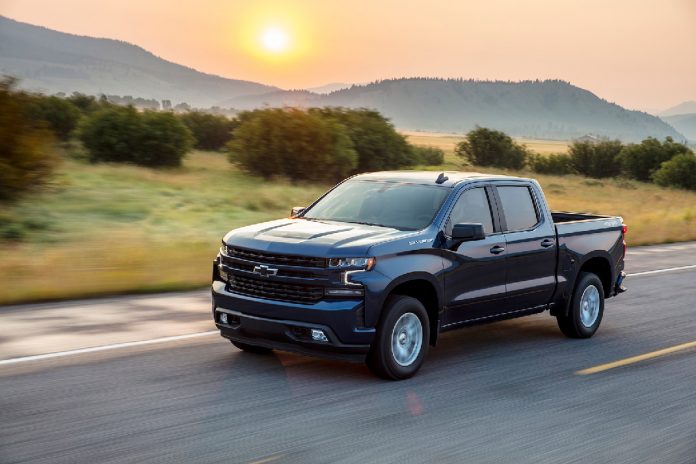 After falling to third in the pickup wars, Chevy rolled out an all-new Silverado last year fully expecting a finely honed exterior and clever four-cylinder engine would let it recapture market share lost to Ram over the last few years.

But a funny thing happened on the way to the awards ceremony.

For 42 years, Ford has been the gold medalist in the pickup games, and with all-new F-150s rolling into showrooms, that is not likely to change. For just as long, Silverado took home the silver. Toss in sales from corporate cousin GMC, and the GM and Ford ran neck-and-neck.

Ram is proving to be the little engine that could. In 2008 it switched from rear leaf springs and went with multi-link coil springs. Though that causes a marginal reduction in hauling and towing capacity, it allows the truck to drive and ride like a car. In an age when more pickups haul families than hay bales, the change has been a hit.

Ram later tossed in the most sophisticated interiors and infotainment systems, also hits, and moved into second on the sales charts.

Alas, poor Silverado. The 2020 version is not by any objective measure the best pickup on the road, but it is a competent and quiet truck — darn sure the best Chevy has ever built — and that’s more than enough for Chevy fans.

According to statistics from J.D. Power, Silverado buyers are older, practical traditionalists. Nearly all (90%) are male, and 92% prefer to buy a domestic vehicle, compared to 81% for the segment. They earn slightly less ($102,542 in household income) than the average buyer ($110,282).

On both those questions, the Silverado is a mixed blessing. We think Fords have the strongest engines and, although Ford and GM co-developed their 10-speed transmission, Ford seems to hold the edge in transmission engineering talent. Ford 10 speeds are smooth as the flight of the dream and brilliant in gear selection in performance situations.

The Silverado RST we just drove also had smooth shifts, especially in mid- to top-range shifts, but felt clunky on take-off.

On the other hand, we think Chevy has the steering and suspension dialed in quite well. The truck goes where it’s pointed with minimum body roll. For its size, it’s quite nimble.

Ram offers a slightly better fuel economy than GM, thanks to light hybrid conversions, but the Hemi engines have not been redesigned in decades. We’re sure they’ll serve first owners well, but we worry how they will hold up when the odometer hits 150,000 miles.

GM’s 4-cylinder engine is a brilliant design, with a long stroke to produce the torque pickups need for work. It has also been a sales bust, with a take rate of 10-15 percent. This year, the General rolled out a diesel whose initial numbers match the Ram turbodiesels

We think the engine selection is one of Silverado’s best features. The six-cylinder is perfect for work trucks and fleet vehicles.

The 5.3L V-8 is pleasingly smooth and more than capable both on and off-road. It is the one most buyers choose.

We love putting our foot in the 6.2L V-8. With that much torque available, it’s the one for people who tow big things. We have yet to test the new diesel.

Hurting on the inside

GM’s pickup cabins are an embarrassment. While the other two American makers have created living-room interiors with sophisticated materials, great sound systems, and big-screen infotainment screens. GM has hardly advanced in the past two decades. Ram and Ford offer 12-inch screens. The biggest you can find in a Silverado is eight inches.

In the Silverado, cheap plastics abound. Unless you pay top dollar, seats are hard and flat. Gauges and switchgear look like something designed by a committee of adversaries. When features were added, the controls for them were placed wherever they fit, not where they best fit the user’s needs.

Of course, if you trade in an old Silverado for a new one, and do not check out the competition, you will never know that. We think GM is counting on that to extract the greatest profits possible.

Or they did it so they could offer the biggest discounts and rebates, which strikes us as a funny way to do business. When you give ground on quality, you also must give ground on price.

Likewise, Chevy makes you pay through the nose for every piece of driver assistance technology, such as forward collision warning with automatic braking. Chevrolet reserves most of those features for top-of-line LTZ and High Country models and then buries them in option packages.

Bear in mind, more and more automakers are making these life-saving features standard.

One might assume GM looked at Ram’s redesigned frame, which includes front splay rails to ensure cabin integrity in frontal collisions, and decided that was too much time, trouble, and money. In Insurance Institute for Highway Safety testing, the Silverado earns good ratings, the best given, for all evaluations except front passenger protection in frontal collisions. The headlights rated poor.

The National Highway Traffic Safety Administration gives the Silverado four stars out of five. The 2020 F150 earned four stars. The 2021 F150 is yet to be tested.

Ram got five stars but we hasten to add that is the new Ram, built in the United States. The Ram Classic, built in Mexico, has the last generation’s body and frame and earned four stars.

Every Silverado comes with a rear seat reminder. Also standard is Teen Driver technology, which gives parents a report card on how a child drove the vehicle.

Bottom line: If you love Chevys, you’ll love the new Silverado. If you’re buying your first truck, you’ll probably choose something else.

Indiana council leader wants to give up police armored truck