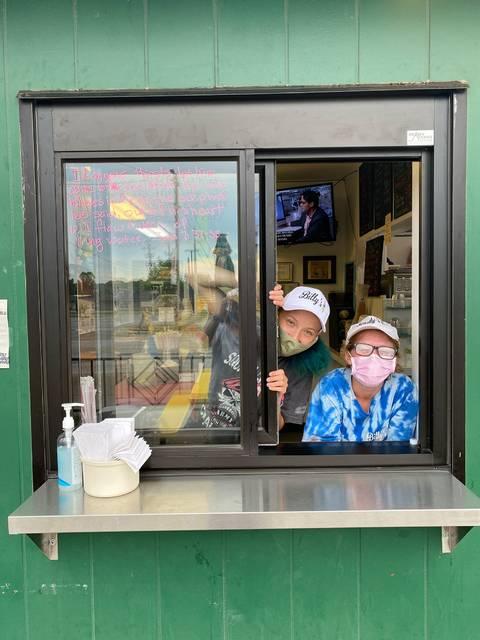 There is one spot in Adel that is known for ice cream and that place is Billy’s Ice Cream Store, owned by Billy Nuzum. Lately, they have been making business updates to help make the flow of the service faster for the customers and easier for the workers.

“There has always been an ice cream shop in this location since almost the beginning of time!” Nuzum said.

Nuzum worked at a doctor’s office in West Des Moines for 12 years and the job became too stressful. She prayed for God to bring her to another job.

“One Monday morning, my phone rang at my desk and the ‘then’ owner said, ‘Billy, I’m going to sell the place in Adel, are you interested?’” Nuzum said as she jumped on the opportunity.

Over the years, Nuzum has enjoyed hearing stories from the teenagers that have worked there during high school and from past owners who have stopped in to visit.

“We do some food,” Nuzum said. “We have perfected our beef burger recipe and also make chili dogs. Tuesday through Friday, we have lunch specials with my right-hand helper, Dee Marshall, being the chief cook.”

They make hot beef sandwiches, cavatelli, tacos and walking tacos, depending on the day. The food stops at 7 p.m. as ice cream is their main focus.

Nuzum shared that opening this year was challenging, due to COVID-19. They immediately had to close down their picnic tables, ordered by the state. The indoor lobby also closed, which forced them to do all their business through one little serving window.

“We were challenged to work so hard at disinfecting everything, inside and out, and also wearing masks,” Nuzum said. “At the same time, offering our best service and friendly personalities to our friends and customers. I missed so much being able to really visit with people face-to-face.”

Billy’s Ice Cream Store has been in constant change since Nuzum took ownership in May of 2015. Nuzum said she is always trying to make things better, easier for the workers and nicer for her customers.

“I have already replaced all of the equipment, Nuzum said. “Soft serve machines, freezers, even the picnic tables and the floors have been replaced with the help of Mid Iowa Subway, whom I lease from. They have been wonderful support for me.”

Recently, Billy’s Ice Cream Store has been making more updates, including replacing the umbrellas on the picnic tables. Team member Brianna Johnson, suggested they flip the food side with the ice cream side to see if they had more room. They also added a new service window, so they could take orders at one window and send them out through the second window.

“That made a huge difference, as we did not have to crisscross orders through one window,” Nuzum said. “We purchased a small amount of new equipment and had a local friend come in and do some carpentry for us. We are still adjusting; things aren’t always at our fingertips where we’re used to having them.”

During construction, Billy’s Ice Cream Store was only closed for one day.

Nuzum wants Dallas County to know that they are here in Adel and everyone is welcome. Afterall, her favorite thing about Billy’s Ice Cream Store, is the customers.

“Adel has embraced me since day one,” Nuzum said. “They taught me everything I know about ice cream and I listen to them. If they say I should try something, I do. They laugh with me; I know their children and their parents. I pray for them and there have been many times when they prayed for me.”

Nuzum shared her appreciation for her team members over the years, saying she has a special team of employees and has worked with some of the best kids in the area.

Their store motto is, “The things you learn working in an ice cream store.” Employees have to start by learning how to count change and they go from there. There are no boy/girl jobs and she will teach as much as they want to learn.

“We are a happy place. There is no crying at the ice cream store. I’d love to meet everyone!” Nuzum said.

Nuzum loves that kids can ride their bikes to her ice cream store and celebrate sports, dance and school activities there. She also loves when kids stand on the rail on the patio and try to get the truck drivers to honk their horns at them.

“This is Adel’s ice cream shop and it always will be as long as I am here,” Nuzum said.