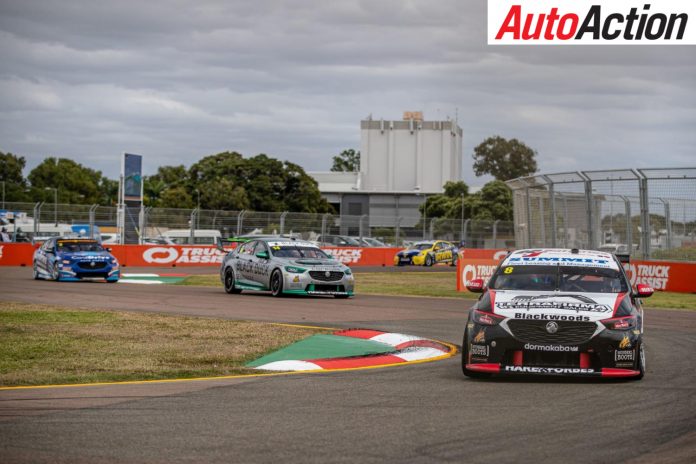 Brad Jones Racing has continued its fine form in the 2020 Supercars Championship, the only handbrake has been a number of accidents, Jones admits while resources are thin, the team will get through.

With Nick Percat’s two race victories, a maiden podium for Todd Hazelwood and career best single driver race results for Macauley Jones and Jack Smith, BJR is riding the crest of a wave.

These outstanding results have been slightly marred by the quartet being caught up in several Saturday incidents.

The first race, both in Darwin and on the streets of Townsville Percat, Hazelwood and Macauley Jones all picked up heavy damage.

But thanks to the team back at the workshop in Albury BJR has been able to get through these tough times.

“We took a pretty big hit at the first round (in Darwin) and used a lot of stuff, but we bought a truck up here with the Super3 car last weekend and they brought some gear up here in that,” Brad Jones told Auto Action.

“We’ve still got some people back at the workshop and they’re busy making stuff and we are freighting things backwards and forwards, it’s a bit lean, but I think that we’re doing okay.

“Our manufacturing department is still operating, while it’s short of a couple of people at the moment, they’re working pretty hard to repair whatever we need, be it arms, bar irons or whatever it is that we’re short of.

“When the bits are manufactured, we try and freight them to wherever we are at the time, it’s a lot more difficult when you have to get stuff freighted in and out, but all the Victorian teams are doing the same thing, we’re all going through the same pain. Due to the collision in the opening race in Darwin, Hazelwood’s car carried an issue that the team were unable to find, however Jones said that has now been rectified and the incidents are just part of motor racing.

“We are having a pretty good run at the moment, unfortunately we’ve had a couple cases where we’re taking two steps forward and one step back, it’s beyond our control which is frustrating but as a unit I think we’re performing quite well,” Jones said.

“We had some brake issues with Todd’s car and we worked through it, but it was a lost weekend really.

“But we came here (Townsville) and out of the box, reset, and he’s going good again.

“Stuff happens in motorsport, and I can’t do anything about it, but twice now Nick’s and the team have not had a lot to do with the things that have stopped the car, but that’s racing, we just can’t afford to have any more problems.”

Jones feels that if the team can get through the second Townsville event this weekend without incident, they should have no problems with a shortage of spares.

“We are at a street circuit at the moment and that’s fraught with danger, if we can get out of Townsville okay I think we’ll be in a much better spot,” he explained to AA.

“But we’re only halfway in and in all honesty, we’ve had a couple of rough weekends, hopefully that’s behind us and we’ll see what happens this weekend.”

For more of the latest Supercars news pick up the current issue of Auto Action. Also make sure you follow us on social media Facebook, Twitter, Instagram or our weekly email newsletter for all the latest updates between issues.

Impact of Covid-19 on Grille Guards Market Expected to Witness the...