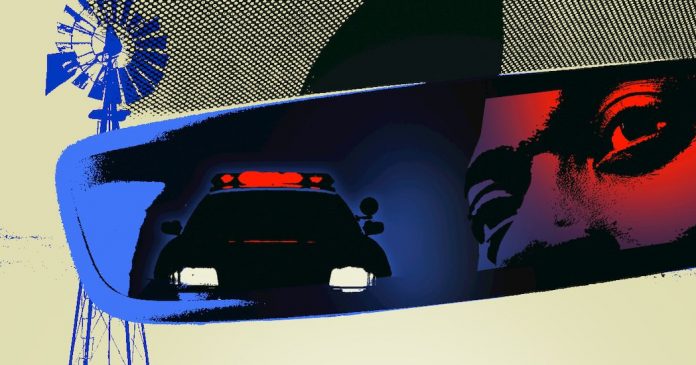 My vehicle suited the setting. It’s a curious thing: After years of sporting sedans, I bought the pickup about a year ago partly for the extra cargo space, but also to avoid drawing the attention of Missouri police. In a region where pickup trucks are status quo, the Ram, I suppose, is my rather sad attempt at vehicular camouflage. Perhaps it’s a coincidence (and I’m sure I’ll regret thinking this), but I haven’t yet had any run-ins with the law in my truck; only lots of locals pulling up beside me at stop lights to offer the “wow-there’s-a-Black-man-in-a-pickup” thumbs up.

Heading east on I-70, with the St. Louis’s Gateway Arch looming over the Mississippi River, I settled in as the skies brightened. I crossed the state line into Illinois, and around noon, I pulled off at a gas station to fill my tank. I had packed plenty of food and drinks to minimize going into public spaces and contracting the coronavirus. But there was no way to minimize the tedium of sanitation on road trips: the masks, the wiping of hands and handles and knobs as I got in and out of the car. Walking through the gas station toward the restroom, I noted that less than half the patrons wore masks.

Minutes later, I was back on the highway, sailing past a blur of farms, fast-food restaurants and truck stops. I once lived in Illinois, in Chicago, and as I drove along the interstate, the thought of stopping for a meal, perhaps looking up some old friends, occurred to me. But I was wary about lingering. According to a 2019 report by the American Civil Liberties Union, Black and Latino drivers in Illinois were more likely to be asked to be searched by police, even though they were less likely to be found with contraband during consent searches than white drivers. In recent years, Chicago police have more than tripled their traffic stops, with Black drivers accounting for the majority of this increase.

So, the decision was simple: I was making good time on my trip to Detroit, and I kept driving.

This kind of calculus is, perhaps, unique to Black drivers in America. Yet here’s the sad irony: Historically, our cars were viewed as our best refuge against white violence and aggression while traveling. After Emancipation, all the way through the 1950s and ’60s, we relied largely on public transportation, whether it was buses, trolleys or trains, and coupled with verbal and physical harassment, suffered the indignities of separate, inferior service.

The mass production of the automobile was a game-changer for African Americans. As the prominent economist and sociologist Gunnar Myrdal, whose studies on the American racial divide led to a Nobel Prize, wrote in 1944: “The cheap automobile has meant for Southern Negroes, who can afford one, a partial emancipation from Jim Crowism.”

Still, I remember a colleague telling a story of heading north from the Carolinas for family vacations. His father, an army veteran, would wear his uniform in the sweltering summer heat for the entire drive, hoping his patriotic service would prevent police harassment.

The Day – Children’s Museum of Southeastern Connecticut readies to reopen