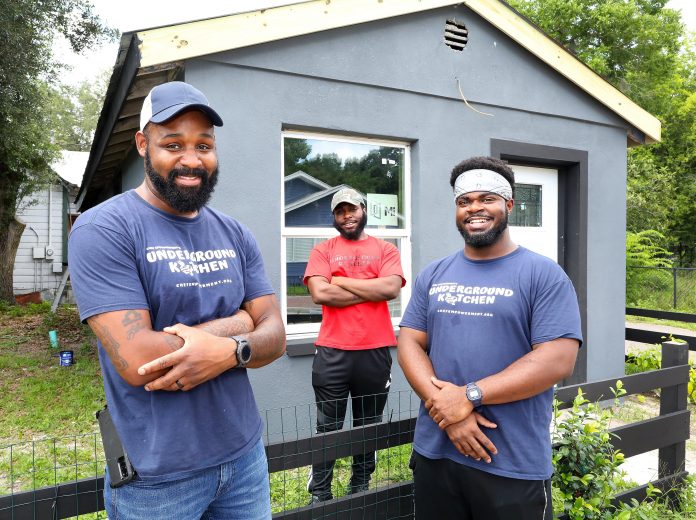 Alachua County has a deep-rooted cultural history that includes instances of racial injustices that span back to slavery and lynching — something that present community leaders are trying to atone for.

It is also an area known for groundbreaking accomplishments from political figures such as Josiah T. Walls, a former Gainesville mayor, county commissioner, school board member and U.S. senator and congressman; and Ellas McDaniel, known to most as Bo Diddley, who brought rhythm and blues to the area during the last decade of his life.

Nothing brings communities together like a shared meal, so in the name of unity for all of Gainesville’s residents, we compiled a list of several Black-owned food businesses.

A new east Gainesville restaurant specializing in southern cuisine — everything from oxtail, lamb and pork chops to chicken and biscuits and sides of collard greens — will open later this month.

Chef Empowerment’s Underground Kitchen, 722 NW Fifth St., is the most recent undertaking of first-time business owner Carl Watts, who previously worked as a gang intervention specialist in the Black on Black Crime Task Force at the Gainesville Police Department. He later began a culinary career at Blue Gill Quality Foods and climbed the ranks to executive chef.

In 2017, Watts established Chef Empowerment as a program to teach at-risk youth life skills and job training. So far, 44 community members have completed the six-week course.

To create the upcoming Underground Kitchen, Watts and his team renovated a historic east Gainesville building that previously housed a shoe shining shop and later a gambling house, Watts said, but it’s been vacant for the past 18 years.

“I’m really passionate about taking something that has a historical significance in East Gainesville and bringing it a new life,” he said.

At the nearby White and Jones commercial building, 1001 NW Fifth Ave., Underground Kitchen will have a private dining hall for parties and catered events.

Underground Kitchen, 722 NW Fifth St., and the private dining hall at 1001 NW Fifth Ave. are expected to open by the end of June.

Owner Antonio “Tony” Jefferson previously worked at The Swamp Restaurant before deciding to become his own boss and sell a variety of sandwiches, tacos, wings and more.

“The owner there showed me the ropes and the ins and outs of the restaurant business,” Jefferson said.

His favorite part of running Swamp Religion, a nod to his former employer and the Gator football team, is developing and cooking interesting flavors and recipes.

“Cooking for a lot of people and seeing the smile on their faces,” Jefferson said. “We take pride in our work.”

When Fremon Williams found out the original owners of Charlie’s Snow Shack were selling the business in 2018, he turned to his wife, Darnelle Williams, and joked that they should buy the place.

“We were just fanatics of the product, the shaved ice, and the people,” he said. “We both had full-time jobs and a 2-month-old baby.”

But Darnelle raised the point that they would have hated to see one of their favorite businesses close. Why not give it a shot? Within a week they were in the process of taking over the shaved ice shop at 14 NW Seventh Ave.

Dozens of tropical and fruity flavors such as coconut, mango and passion fruit are on the menu, and can be topped with cherries, marshmallow cream, sweetened condensed milk and more.

Williams, who still works full time as a pastor at Alive Church, said running the business is all about the people he serves.

“We have a saying at Charlie’s that it’s Gainesville’s happy place,” he said. “We want you to leave feeling better than how you came.”

4 Paumes, 2687 NE 70th St., is a grocery store and restaurant owned by Christopher Hopkins, who is from Monteocha, east of Gainesville.

Hopkins, 24, opened the place about three months ago.

“I’m purchasing the store that I grew up going to, in the neighborhood I’m from,” he said.

The store name’s meaning, which means four palms in French, represents Hopkins and his girlfriend’s efforts to create something special.

On the menu at 4 Paumes — which is expected to soon operate as a mobile food truck that will travel around Gainesville, High Springs and Starke — are seafood boils with shrimp or crab, as well as fried seafood and chicken drumsticks.

Guests can currently order their meals for carryout and there are outdoor benches where people can chow down nearby.

“My goal is to introduce true flavor that you can get addicted to,” Hopkins said. “You don’t have to go to Miami or go to LA — you can get it right here in Gainesville.”

He said customers have loved a new flavor he recently introduced, a curry crab seasoning.

Joshua Joseph knew he wanted to be chef by the time he was in middle school.

“I’d be side by side with my mom cooking for special occasions like at Thanksgiving and Christmas,” he said. Joseph, 24, later joined the culinary arts program at his Fort Lauderdale high school before attending culinary school.

After culinary school at Johnson & Wales University, Joseph wanted a change in scenery. His brother had been living in Gainesville and knew a place where he might be able to get his foot in the door, spatula in hand.

To learn more about Chef JJ Creations or book a service, visit chefjjcreations.com.

Maple Street Biscuit Company has two franchised locations in the county at Butler Town Center and in Tioga Town Center, owned by Jason and Edwina Hurst.

The Hursts have owned two local franchise locations of Maple Street Biscuit Company, which serves comfort food with a modern twist, since June 2018.

Guests can visit either location for their fix of flaky biscuits topped with items including fried chicken, gravy, bacon and an egg or maple syrup.

Jason Hurst said owning the restaurants is all about being connected with the community.

“Our mission is to help people, serve others and to be there for them,” he said. “It’s so much more than just about the food.”

Demetrious McGowan has been cooking since he was 13, but it wasn’t until four years ago that he first set up a car trailer as a food truck and began frying and grilling food for customers.

The name for his place comes from McGowan’s nickname, Waynehead, which comes from a cartoon character.

“My cousin gave me the nickname because I had a big head like the character,” McGowan said. “It’s what everybody knows me by.”

Darron Alvarenga, a co-owner at Caribbean Spice, remembers the days when the 35-year-old Gainesville restaurant was one of the main midtown food stops for hungry and broke University of Florida students.

“For a couple of bucks back then, you could have a full stomach,” he said. “As the city grew, we were able to adapt with it instead of faltering … Now some of the students we served back in the day are homeowners and still our customers.”

Caribbean Spice, now at 1310 NW 23rd Ave., was started by a family who had success with a similar restaurant in South Florida.

Now, the original owner’s daughter and her husband, Natalie and Chris Chung, work alongside Alvarenga to provide Gainesville with Caribbean cuisine.

Some menu highlights include handheld patties — similar to empanadas, that are stuffed with meats such as beef or spinach as a vegetarian option.

Alvarenga said he’s not surprised that customers enjoy the jerk or curried chicken, but rather by the recent interest from guests in oxtail.

“It’s not something you traditionally see in American cuisine,” he said. “But we’re seeing it being served in high-end restaurants right now. It’s gaining popularity.”

For 17 years, Reggae Shack Cafe, 619 W. University Ave., has offered a piece of Jamaican and Rastafarian culture to Gainesville residents and visitors.

Owner Omar Oselimo said the restaurant’s menu, which includes many vegan options, was inspired in part by the city’s music scene.

“I was working as a DJ, and between sets the punk rockers who were vegan would come in for food, and the audiences would follow,” he said.

He also said veganism is common among Jamaican Rastafarians.

Meat and seafood dishes like jerk pork, brown stew chicken and Jamaica’s national dish — ackee and saltfish — are joined on the menu by a vegan steak and curry palm of hearts.

Reggae Shack Cafe, 619 W. University Ave. is open for takeout only, seven days a week from 11 a.m. to 10 p.m. Order online at reggaeshackcafe.com.

Assessing the Fallout From the Coronavirus Pandemic – Positioning Services Market...

Department of Health: Plans not finalized for COVID-19 test site |...