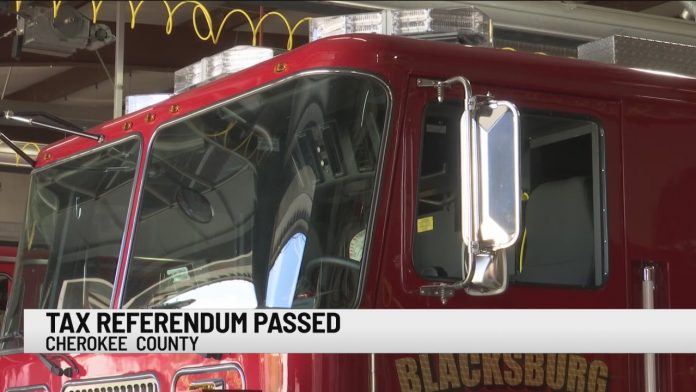 “We try not to run any calls so that means everybody’s safe; but when we do run calls, we run 3-5 calls a day,” Blacksburg Fire Chief Donovan Ford said.

When it comes to fighting fires and saving lives, those at the Blacksburg Volunteer Fire Department said it’s in their blood.

“I love everything about it,” firefighter Matt Evans said. “Just the smiles on people’s faces when we help them out, because, a lot of times, we respond when people are at the lowest point in their life.”

“Fires, HAZMAT situations, all medical calls. We just try to help the community out and try to keep them safe,” Chief Ford said. “From a structure fire to a water rescue–anything that may come in play that they need the fire department for, we just want to make sure we’re there for them.

But, they told 7 News, it’s hard work–especially with limited resources.

That’s why they’re excited that a tax referendum passed in Tuesday’s election, giving them the funding they’ll need to upgrade.

“It’s been a long time coming for the Blacksburg Fire Department to help give back to the community,” Chief Ford said. “And the community came out and showed their support for the fire department and everybody was overwhelmed. We were very excited and celebrating last night.”

The tax referendum will help the department replace an older engine with a new one that will include enhanced rescue capabilities.

“That’s going to help us get to the calls safer–first and foremost–and more efficiently, and it’s going to carry more tools and help us be ready for any situation,” Ford said.

“That will help tremendously when there are multiple injured people on one call–whether it’s a wreck or a fire scene–we can have different people on that truck helping people in different ways,” Evans added.

The department is also looking at adding a new full-time paid position, which they said could help with response time big time.

“From the hours of 8:00-5:00, most people here are at work and sometimes it’s hard to get a truck out to people because everybody here has families, jobs, and responsibilities they have to take care of,” Evans said.

The department told 7 News none of it would be possible without the community’s support.

“We were overwhelmed with joy and we would just like to say ‘Thank you. You will be safe in our hands,’” Ford said.

What you need to know before watching Selena + Chef