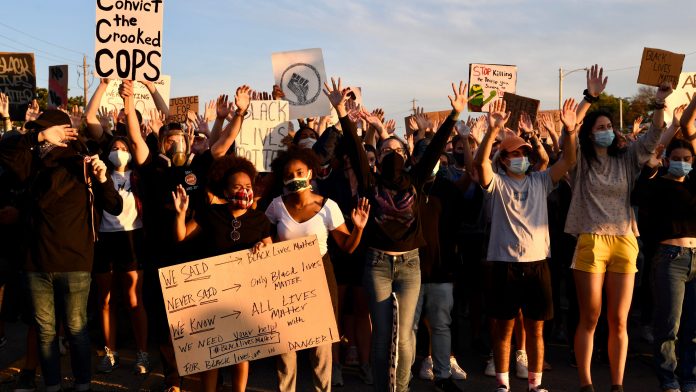 Des Moines Black Lives Matter teamed up with Iowa Freedom Riders — a group of activists based in and around Iowa City — for statewide action Monday, including blocking major interstates. Tensions escalated between protesters and police during a march through downtown Des Moines resulting in 18 arrests, 17 adults and one juvenile.

Some protesters were pepper-sprayed, including someone who said she’s 16-years-old.

The evening began when Des Moines BLM activists marched toward Interstate Highway 80 where it merges with Interstate Highway 35 near Merle Hay Road, before marching downtown. The crowd of more than 200 was met near the on-ramp to the highway to by police in riot gear, but the protests remained peaceful.

Protesters leave the Skateland parking lot to march towards Interstate 80. Black Lives Matter and Iowa Freedom Riders planned statewide action where protests across the state would block interstates. However, the crowd met protesters at the interchange, so the demonstrators marched through downtown Des Moines on Monday, June 22, 2020. (Photo: Ryan Lenz/Special to the Register)

“The goal today is to show the state government and all the local governments that this movement is well-coordinated and it’s unified. We have connections not just all over the state, but all over the world,” said Des Moines BLM organizer Matthew Bruce, 24.

“We want to show Iowa just how capable this movement is,” he continued.

Des Moines activists made three demands when they met up with 200 to 300 demonstrators at about 7 p.m. at the Skateland parking lot on Meredith Drive:

Once protesters marched toward the interstate, Iowa State Patrol ordered protesters to disperse or be arrested. Organizers repeatedly asked protesters not to provoke police.

“Don’t you dare provoke the police, in the name of Black Lives Matter,” one woman yelled.

Protesters line up opposite a phalanx of police officers who were blocking the onramp to Interstate 80 in Des Moines on Monday, June 22, 2020. Protesters planned to block traffic on the interstate but instead marched through downtown Des Moines. (Photo: Ryan Lenz/Special to the Register)

After marching on Oakwood Drive into residential areas, the group returned to the Skateland parking lot and the crowd lined up for a “car parade” from the Merle Hay area to downtown, near the Capitol. Organizers said the group would march in a loop in the East Village, which they began around 10:30 p.m.

Tensions escalated from there.

Around 100 protesters gathered in the East High School parking lot for the planned march and made their way down East Grand and Pennsylvania avenues. On Pennsylvania Avenue, police stood in formation in front of and behind the crowd of protesters. Protesters were saying they were “boxed in” as they raised their arms chanting “hands up, don’t shoot.”

More: Wyckoff fires employee who drove truck through crowd of protesters at Hy-Vee

Police advanced toward the crowd as protesters began walking on sidewalks throughout eastern neighborhoods in Des Moines. They continued to follow protesters until they got back to their cars in the East High School parking lot. Along the way, protesters were pepper-sprayed and some were arrested.

Protesters march past the Iowa State Capitol after Des Moines on Monday, June 22, 2020. Protesters planned to block traffic on the interstate but instead marched through downtown Des Moines. (Photo: Ryan Lenz/Special to the Register)

“What law are we breaking? We’re literally walking on the sidewalk,” community activist Jaylen Cavil, 23, told the Des Moines Register as the crowd continued to walk on sidewalks and away from police. He said he saw police pepper spray protesters in the face, hit them with riot gear and arrest some protesters.

“We supported the Iowa State Patrol and other agencies with efforts to close down traffic on major roadways to ensure a safe protest in the early evening. Most of the protesters left at the conclusion of that event, and others chose to move to the East Village neighborhood in the late evening and disrupt the neighborhood,” said Des Moines Police Department spokesman Sgt. Paul Parizek.

Police disperse protesters using pepper spray after they marched around downtown past the Iowa State Capitol on Monday, June 22, 2020. (Photo: Ryan Lenz/Special to the Register)

“Multiple dispersal orders were given by the Iowa State Patrol, and ultimately arrests were made,” Parizek continued.

Des Moines BLM took to Twitter following the march, urging those with footage of police to post online.

Videos of arrests have already been circulating online. In one video, a woman is shown laying on the ground as police arrest her. She tells them she has a medical condition and that she fears for her life.

I’m at Skateland’s parking lot in Des Moines, where protesors in and around the city have been told to meet for a planned statewide action between @DesMoinesBLM and Iowa Freedom Riders.

Andrea Sahouri covers breaking news for the Des Moines Register. She can be contacted at asahouri@registermedia.com, 515-284-8247 or on Twitter at @andreamsahouri.