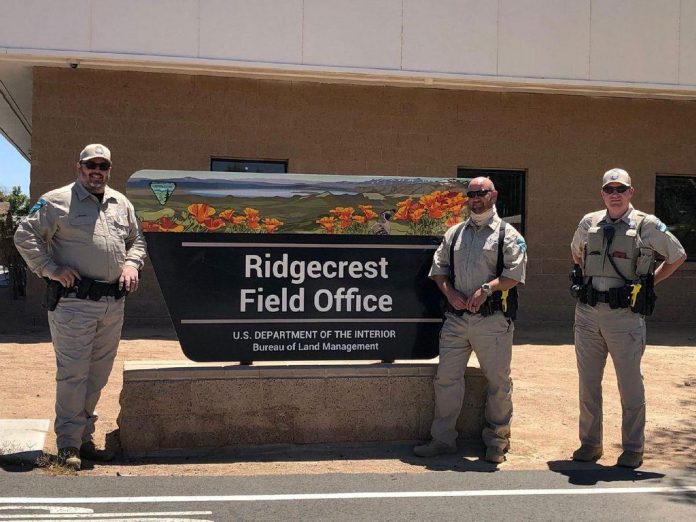 Our 4×4 truck camper was losing traction going up a shale section of road in the Inyo Mountains. My husband, Pres, had driven us many miles through a steep canyon with breathtaking views of the Sierras as we planned to camp to celebrate our 44th wedding anniversary.

Pres tried to back up the truck to find better traction when the shale gave way and we slid off the road, picking up speed heading backward and sideways. I was hoping the truck would get some footing knowing Pres was doing everything he could.

The rig then rolled onto the driver’s side and I braced for us to continue rolling down the rocky slope. However, the rig stayed put on its side as it came to rest. Pres quickly strained to reach and turn off the truck ignition. We looked at each other to see if either of us was hurt. I was securely hanging from the passenger side by the seat belt. Our belongings in the cab had all crashed onto the driver’s side in a heap, but nothing hurt us while hurtling by.

What!? Thank you God, we have cell reception in this remote wilderness. We did not know if the truck was stable and were concerned that it might start sliding again.

Our first challenge was how to get me out of my seatbelt without my body slamming into Pres. I could not find a good foothold and rolled down my window to hang onto the door frame. There was no way I would be able to open the heavy door away from me.

Pres braced his arms up to help me and I wiggled to take the pressure off of my seatbelt so that it would release. I popped out slipping into the back seat behind Pres. We looked to see if we could climb out one of the passenger side windows, now above our heads which would mean shifting our full weight that could start us rolling again. Pres decided our best route of escape was to kick out the windshield.

The windshield gave way after several of Pres’ strong kicks and he quickly squeezed past the broken glass. He grabbed the broken edge to make more room for me to get out and in the process cut his hand making it bleed. Otherwise, we had no serious injuries.

Once safely out of the truck we could see that a sturdy pine tree had stopped our rig from rolling further down the mountain. I felt shaky but after looking at our wreck I was gratefully impressed that we had been saved from what could have been death or serious injuries.

It was about six o’clock in the evening and we faced darkness descending in a few short hours. We reached into the cab to grab a few essentials that could be carried for walking the road back. Wallets, cellphones, water, oranges, hats and jackets.

Pres walked the steep road heading back to call for help as it was too far for me to walk six miles back to Cerro Gordo in the high elevation and expect to get there before nightfall.

I did not want to leave our truck in case we had to spend the night. Staying near the truck meant food, water, and sleeping bags. A soft breeze brushed my face. I smiled at this reminder of our Creator’s presence with us and spoke a quiet “thank you!”

Pres reached the 911 dispatcher, who said a CHP officer was on his way to rescue us. As I started the walk out my legs were shaky on the loose shale. I slipped and fell hard but got up and was glad to only get a scrape.

We lost cell reception when descending and needed to walk out until we had good reception. Both of our bodies were protesting to remind us we are in our sixties now. I took frequent rests to catch my breath as asthma reminded me of the higher elevation.

Shadows deepened as I watched the sun descend over the majestic Sierras, peaking out from behind Mt. Whitney. The dispatcher asked Pres to check in later who then informed us that the CHP did not have a 4×4 vehicle available to reach us and advised us to prepare for possibly spending the night.

I was exhausted knowing it was too far to go back to our truck and the temperature was dropping. We had also gone through most of our water supply. I had visions of mountain lions or bears stalking us while exposed out in the open. I started to chide myself with why had we left our truck and started to feel angry and anxious.

Then, I reminded myself of the miracle of our situation. A tree stopped our truck from rolling off the mountain and we both had walked away with no serious injuries. I made a deliberate choice to focus on the gift of having each other.

Pres checked in again letting the dispatcher know I was not physically able to continue walking out. The Bureau of Land Management (BLM) Rangers had been contacted for our search and rescue. Located 70 miles away in Ridgecrest, they were equipped with a Utility Terrain Vehicle (UTV). At 8:30 p.m., it was growing darker as arrangements were in the works. The dispatcher assured us we would not be left overnight on the mountain top. My heart was thrilled.

Knowing our rescuers had to drive over rough roads with sheer cliff exposures on such a dark night, we prayed for protection over these heroes as we did not want anyone to die over our mistake.

From our rocky perch we could see the distant lights of Keeler and scattered mining operations. The stars were spectacular with no moon. I picked out the Big Dipper and was in awe of the celestial showcase overhead. Pres started to softly sing a familiar hymn and I joined him to raise our voices together in thankfulness.

The night air grew colder as we watched with anticipation for headlights to appear on the mountain road.

Finally, we could see lights far below, hoping it was the Rangers. Again we saw lights lifting our spirits.

Finally lights flooded a large slope as they moved in closer now at almost 11:00 pm.

Hearing the growling motor of the UTV getting closer, we used our cell phones as flashlights to shine through our clear water bottles to work as lanterns for our rescuers to see us.

The driver slowed coming to a stop in a four-seater dune buggy-looking vehicle from which two large men wearing helmets emerged. Their shirts were marked “Police” and they looked equipped to take on any danger that the Inyo Mountains could offer.

We were warmly introduced to Jim and Jason, BLM Rangers to the rescue! They kindly questioned us to be sure we were not seriously injured. I was happy to climb in the backseat and quickly learned how to buckle a five point harness.

Jeff, the CHP officer, was waiting in his black and white SUV ready to drive us to the hospital if we required medical attention. We assured him we were okay and just wanted a place to rest and find a rental car. We thanked our rescuers for giving us the best anniversary present ever!

As Jeff drove us down the mountain dirt road he informed us that there were no car rentals close with Ridgecrest being the nearest. Knowing that the Rangers would be returning there the officer arranged for us to ride back with them. We were dropped off at the Clarion Inn where we checked in at 2 a.m. Avis car rental was located on the premises, so we were all set.

Our achy bodies enjoyed a shower and getting some sleep. We didn’t have anything except for the clothes on our backs so the next morning I walked across to the Walgreens to get bandages for Pres’ cuts, pain reliever, toothbrushes, bottled water… $100 later I filled one shopping bag.

We were delighted to have hot coffee and a hearty breakfast at Kristy’s Restaurant as we had not eaten anything since breakfast the day before, except for the oranges we carried to eat after the accident.

We checked in with Jim to see if he had any connections for someone to take us back to the wreck to retrieve a few of our belongings, most importantly an heirloom pistol and my camera loaded with photos.

Jim explained that we could not leave an unsecured weapon on site, so he would send two officers to take us back. We were thrilled at the prospect of at least recovering some of our valuables.

Even though he was off-duty, Jim offered to meet us to go over the details. When he opened the door to his big red truck I spied his wife in the passenger seat. I jumped into the freshly vacated driver’s seat to personally thank her as Jim had been out all night.

Julie’s beautiful blue eyes danced at my story as she quickly related how her own big guy had gotten his truck stuck in the snow. She pulled off her headscarf to reveal her beautiful bare head and shared her personal battle with breast cancer.

She too is a special hero!

We held hands and prayed for healing and strength to return to her body. I felt honored to meet this warrior who has also served in the Army, where she met her Jim.

Early Sunday morning, Jason and Brandon were the Rangers who met us for the trek back into the Inyo Mountains. As they drove I realized how far we still would have had to walk out if the Rangers had not come to our aid.

Once we reached the wreck the Rangers secured our truck with a big tow strap to a nearby tree before allowing us to explore the cab. We were happy to find our pistol still in place and handed it over to Jason for safekeeping.

The men removed the propane tanks and camper battery. I was amazed at what we were able to retrieve and take back in the small vehicles that brought us up.

Despite the sad circumstances, I was having the adventure of a lifetime riding in a UTV driven by a handsome young Ranger. I found out Brandon’s mother and I are about the same age. The two Rangers were patient, kind and professional in taking care of the two senior citizens in their charge.

Before this trip we did not even know the Bureau of Land Management has Rangers to police and protect our public lands. The BLM police force oversees vast areas of wilderness and is equipped for search and rescue.

We loaded up our rented car and headed for home thankful for the BLM Rangers. From the bottom of our hearts, we are so grateful to be safe and well, thanks to those who work hard to serve and protect! We have enjoyed exploring the backcountry for over 40 years, with this being our first wreck. Thanks to our rescue, we will have more years to explore and enjoy our public lands.

To read a more detailed account and to see photos of the wreck and hard-core UTVs visit https://boondockercamping.com/wreck-in-the-inyo-mountains/.