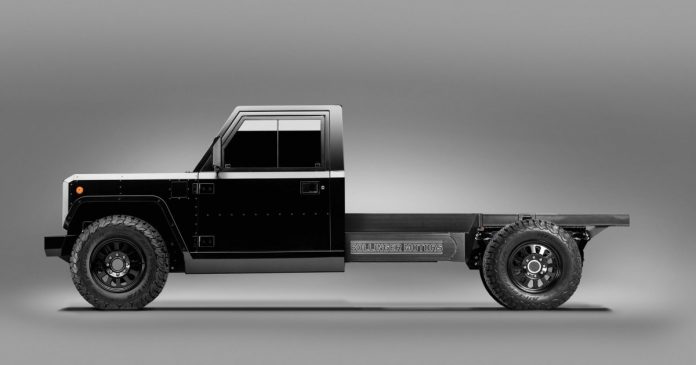 After revealing its electric B1 utility vehicle and B2 pickup truck, Bollinger Motors is moving toward the commercial side of the market with a Class 3 chassis cab. Available in both single- and double-cab configurations, the flexible, rugged B2CC will open up serious versatility for commercial customers looking to spec trucks around their exacting demands.

“The Bollinger B2 Chassis Cab’s unique features – including the 5,000-lb (2,268-kg) payload and large energy source to power tools – make it perfect for businesses, small and large,” said CEO Robert Bollinger in announcing the B2CC today.

That energy comes stored in a 120-kWh battery pack fed by a 10-kW onboard charger. The chassis also includes the off-road-capable innovations that have helped Bollinger’s other trucks stand out in the electric market, including portal gear hubs and a dual-motor all-wheel drive. Also included are safety-enhancing systems like hydraulic anti-lock brakes, electronic traction control and stability control. The independent front and rear suspension system brings self-leveling capabilities.

Bollinger says that it will offer various wheelbase options, as well as the two- and four-door variants. It’ll also offer both full and cutaway cab options. Plans call for the chassis to become available to commercial buyers beginning in late 2021.

The B2CC follows the skateboard-style Class 3 E-Chassis that Bollinger announced last month. Also designed with commercial customers in mind, this flat chassis promises even more flexibility. It can be equipped with 120- or 180-kWh battery packs, configured in rear- or all-wheel drive, and built with or without the portal gear hubs. It will also launch in 2021.

Before Bollinger gets its commercial platforms up and running, it’ll first have to begin production on the B1 and B2. When Bollinger announced pricing last October, it said that production would begin this year with the first deliveries in 2021, but it hasn’t exactly shaped up to be an ideal year for launching a pair of $125,000 low-volume e-trucks.

In fact, even the auto giants have been pulling back on their EV projects. Just this week, GM postponed the May 20 debut of the electrified GMC Hummer and Lincoln announced the cancellation of the EV it was developing in conjunction with Rivian. We don’t expect those announcements to be the last of their kind.