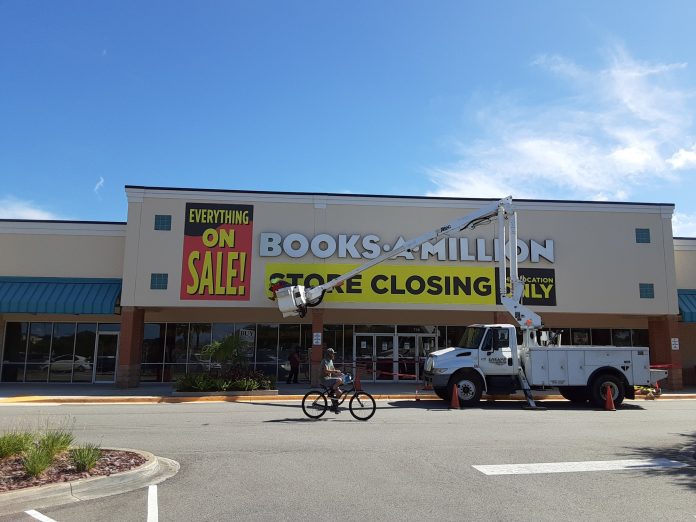 A week after hanging a giant “Store Closing” banner above the entrance to its Jacksonville Beach store, a worker arrived at the Books-A-Million store late Friday afternoon to take it down.

Books-A-Million announced July 24 it is keeping the store open at South Beach Parkway Plaza after renewing its lease with Sleiman Enterprises.

The Birmingham, Alabama-based company, which has about 200 stores, said July 20 it was closing the Jacksonville Beach location as part of a review of its real estate portfolio.

The company did not mention any issues with lease negotiations as a reason for closing the store, which opened in 1995.

“We appreciate Sleiman Enterprises & Retail Planning Corporation working with us to assure that we can commit to this vibrant community for years to come,” Books-A-Million CEO Terrance Finley said in a July 24 news release.

“We thought we were leaving, but turns out after a few conversations, now we don’t have to! We’re excited to stay,” Vice President of Marketing Melanie Smith said by email.

The sign company truck arrived at the store soon after Books-A-Million emailed the news release at about 4 p.m. An employee said the store had been informed about two hours earlier.

Books-A-Million was an original tenant at South Beach Parkway Plaza at 738 Marsh Landing Parkway, which is anchored by Publix and Target stores.

Books-A-Million closed another Jacksonville store this year in February at the Regency Park Shopping Center at 9400 Atlantic Blvd.

The company has one other Jacksonville-area store in the Orange Park Mall at 1910 Wells Road.

Here’s why China’s demand for diesel is poised to hit record...