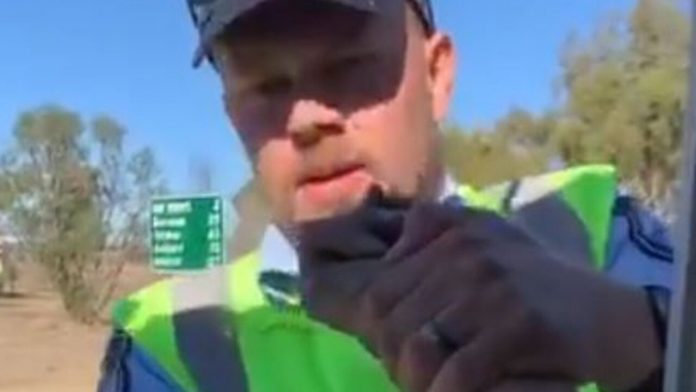 A TRUCK driver has been charged after police allege he crossed a line when attempting to re-enter Queensland, prompting a scuffle that saw a Yelarbon officer hanging from the truck’s window.

Caboolture father Adam Thurrowgood was allegedly unlicensed and unregistered when he drove through the border checkpoint near Goondiwindi without showing a border pass declaration, prompting Sergeant Vaughan Clacher from Yelarbon to conduct a traffic stop at 1.20pm on Monday.

The interaction that ensued was fraught with tension, as Mr Thurrowgood questioned both the authority of the Queensland Police Force and the existence of borders within the mainland of Australia.

“I wasn’t aware I had to complete (a pass) because a border is a boundary, and there’s no boundary there,” Mr Thurrowgood told police.

“The only boundary in Australia is 12 nautical miles off the coast.”

“For f–k’s sake,” Sgt Clacher said, as he reached up into the truck’s driver-side window to unsuccessfully try to remove Mr Thurrowgood from the car.

Mr Thurrowgood insisted he had not committed a crime and could not be arrested, accusing the officer of “acting as an armed civilian outside of the law”.

Two additional officers, from Texas and Goondiwindi, attended the scene and assisted in resolving the matter.

“You get the odd one like that,” Sgt McIntosh said.

“But we haven’t been getting many issues at all, most people are pretty good.”

Mr Thurrowgood is set to appear at the Inglewood Magistrates Court on October 1.

He said he will request police bodycam footage to defend the charges.

The Daily News reached out to Mr Thurrowgood for comment, but did not receive a response in time for publication.

Do not allow negative emotions to overwhelm you | People