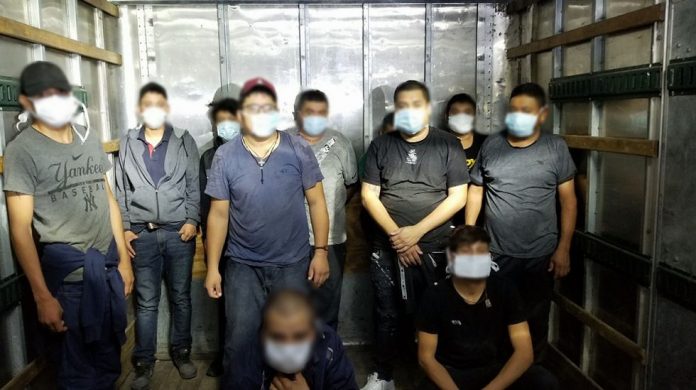 The first incident happened on Friday, June 19th when agents encountered a white tractor trailer at the I-35 checkpoint.

During inspection, a canine alerted to the presence of concealed humans.

After a non-intrusive scan of the vehicle, agents were able to locate 22 Mexican Nationals inside the trailer.

The individuals were taken into custody and both the driver and passenger were arrested.

The second incident happened the very next day when another tractor trailer was referred to secondary inspection after a canine alerted agents to concealed humans.

Agents opened the trailer and found 61 illegal aliens from Mexico and Guatemala.

The individuals and the driver, a U.S. Citizen, were taken into custody pending further investigation by Homeland Security Investigations.

The last incident happened on Monday when agents at the Highway 59 checkpoint encountered a box truck with a hidden compartment in the roof.

Agents were able to find 11 illegal aliens from Mexico.

The driver, passenger and illegal aliens were taken into custody.

Despite the threat of the COVID-19 pandemic, agents continue to prevent the flow of illegal immigration in our area.

Altercation over wearing a mask at a Rancho Cucamonga gas station...

NWI Business Ins and Outs: The Quest to be turned into...