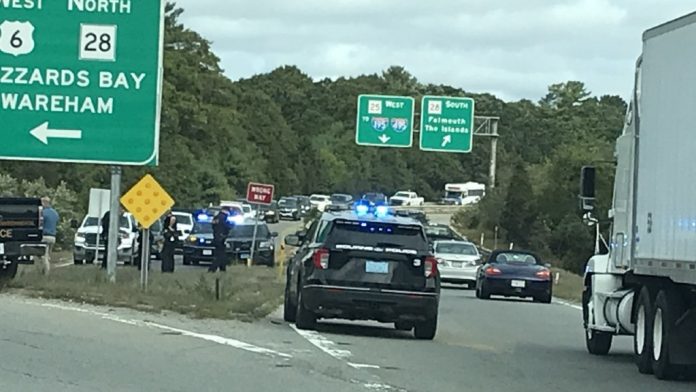 BOURNE (CBS) – A man was taken for evaluation after stopping in the middle of traffic, dancing on his pickup truck roof and throwing money into traffic. Police said they were forced to use a Taser to subdue the man.

Just before 11 a.m., a Bourne Police cruiser was parked in the grass at the center of the Bourne East Rotary. The officer saw a man in a pickup truck stop in the road, blocking near traffic near CVS. Traffic at the Bourne Rotary after a man danced on his roof and threw cash into traffic. (Image Credit: WBZ-TV Weather Watchers Denise)

The man got out of his vehicle and began throwing items at passing cars. When police tried to talk to the man, they said he climbed onto the truck’s roof and “began dancing while gesturing to passing motorists.”

Bourne Police said the man made a threat to an officer, then lunged into the truck. When the man exited his vehicle, the officer drew his gun.

“The man then abruptly spun towards the officers with his hands raised, holding a stack of US currency,” police said. “He then turned away again and walked out into traffic throwing the money in the air. This action caused numerous vehicles to stop and motorists to exit their vehicles.”

According to police, the man later quickly advanced on the officer, who had put his gun back in its holster. The officer deployed his Taser and was able to subdue the suspect.

The man was taken to an area hospital for a medical evaluation.