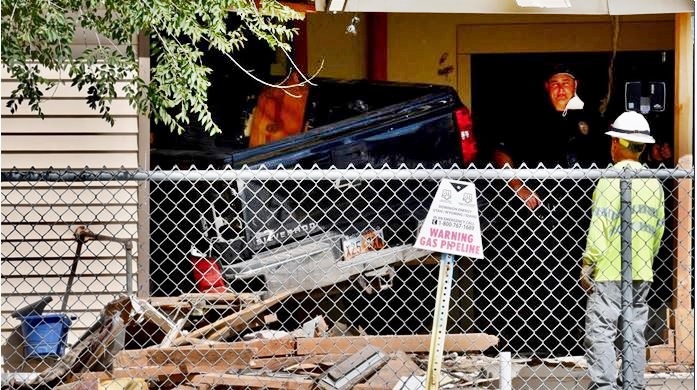 SOUTH SALT LAKE, Utah, July 3, 2020 (Gephardt Daily) — A pickup truck crashed into the front room of a South Salt Lake house on Friday, seriously injuring a 10-year-old boy who was trapped underneath the vehicle.

Two other children, ages 2 and 5, were inside the residence at the time of the crash, but were not hit.

Oehler said the truck was being driven by a man in his 50s, who was heading east on 3300 South when he lost control of the vehicle, which went over a curb of a strip mall, crashed through a residential fence, and went into the house.

“He was driving at high rate of speed, and the pickup is completely in the house,” Oehler said at 4:20 p.m., nearly three hours after the accident.

“Good Samaritans were able to pull two kids out of the house, but there was 10-year-old child who was trapped under the pickup for some time, at last 20 minutes.:”

When the boy was freed, he was transported in serious but stable condition, Oehler said. He was taken first to a nearby hospital, then transported to Primary Children’s.

“It doesn’t appear there was an adult at the home at the time of the crash,” Oehler said. “It appears the oldest was watching the other two. But the mother is at Primary Children’s hospital now.

“The driver is being investigated for possible impairment, but we won’t know if he was impaired until we get toxicology results back from a blood draw,” Oehler said. “There will definitely be charges screened accordingly if there is impairment involved.”

As of 4:30 p.m., officials were still trying to remove the pickup from inside the house, the officer said.

“At this point, the house is definitely unsafe,” Oehler said. “A building inspector will determine the structural integrity of the house. But we’re still trying to extract it from the residence.”

Lanes reopen after pickup truck fire on Route 11 in Vienna...

Ram horns in on pickup truck dominance with 1500 Laramie –...