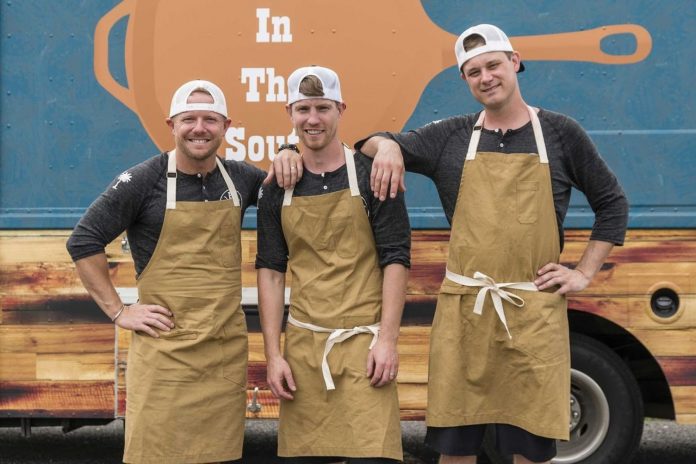 Braised in the South food truck has been rolling through Charleston serving mouthwatering Southern fare since 2017. Now that they’ve made a name for themselves in Charleston, co-owners Steve Klatt and Brandon Lapp are settling down at a brick-and-mortar space on Johns Island later this summer.

The truck started on a whim when Klatt applied to be on Season 8 of Food Network’s “The Great Food Truck Race.” Klatt and Lapp brought their simple but bold flavors on the road with them and secured the win. When they came back home to Charleston, they had the name recognition to be highly sought after for public gatherings, weddings and corporate events.

Klatt and Lapp both live on John’s Island with their families, so when they found out the lease was up at the 3338 Maybank Hwy. space next door to Tattooed Moose, “everything just fell into place.”

Once open, the restaurant will serve their barbecue and Southern staples through a walk-up window, allowing patrons to either enjoy their meal on the back patio or take it home to their family. The back patio will be “comfortable, down home, with a family-style feel” with the help of cafe lights, planter boxes with herbs and misting fans to fend off the heat.

For fans of the truck, Klatt and Lapp will dedicate a section of the menu to favorites like their totchos, smoked wings, and pork and mac bowl. They’ll also serve sandwiches from the truck and barbecue platters featuring your choice of protein, bread, sauces, pickles and sides. The space will be especially family-friendly with fun items like soft serve ice cream.

Although Lapp and Klatt already have a large following, they are excited to develop a group of regulars in their own community.

“What I think I’m really looking forward to is [our] weekly specials. We aren’t going to do it right off the rip, but once we get going and we’re in a good spot we will start doing these daily and weekly specials. We’ll do bone-in fried chicken, whole fish fries, smoked rib nights; things like that.”