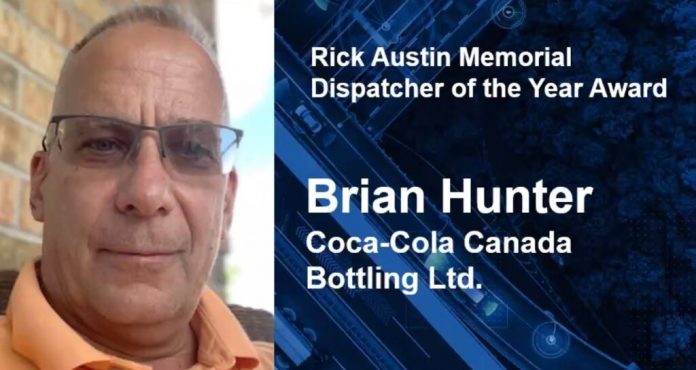 MILTON, Ont. – Brian Hunter of Coca-Cola Canada Bottling is the winner of the 2020 Rick Austin Memorial Dispatcher of the Year Award.

The award was announced Wednesday by the Private Motor Truck Council of Canada (PMTC) at its annual conference.

Hunter began his career 40 years ago as a shipper/receiver, and quickly rose through the ranks of the companies he has worked for along the way, the PMTC said.

He joined Coca-Cola Canada in 2010 as a distribution supervisor for the London branch, tasked with route planning, driver scheduling, customer relations and liaison with the warehouse.

“Brian quickly earned the respect and trust of the drivers and other employees he worked with,” the PMTC said.

It said Hunter had been instrumental in creating quick tips for his drivers, and scheduling regular crew talks to help drivers work through struggles they may be encountering.

The award was established by the PMTC in memory of CPC Logistics Canada dispatcher Rick Austin, who passed away suddenly in March 2017.

Austin began his transportation career as a driver and later became an owner-operator. He joined the John Deere Fleet in 1991, developing a reputation as a dependable driver with a great work ethic.

Austin moved into the dispatch role full-time in 2000, sending trucks out of Grimsby, Ont., and Regina, Sask.

Tim Dreyer of Patene Building Supplies won the award last year. The first dispatcher award was won by Linda Valliere of Praxair in 2018.