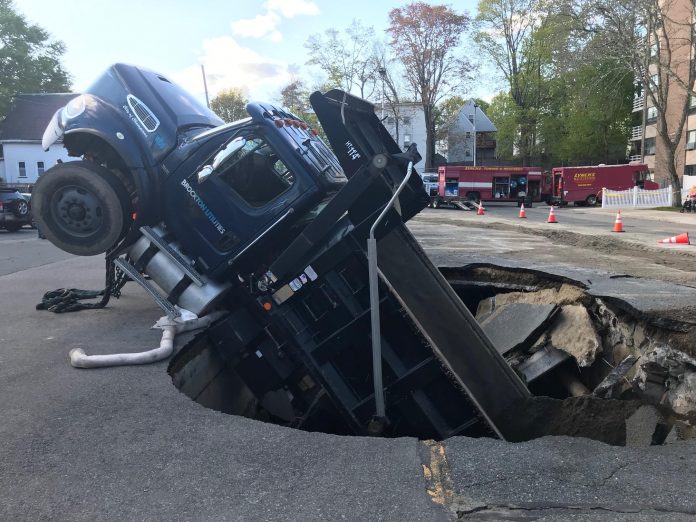 The Brockton Fire Department said it responded at 4:15 p.m. on Tuesday to a report of a truck falling into a massive hole in the parking lot of Manning Tower.

BROCKTON – The city-owned dump truck looked like the Titanic sinking into the ocean, titled upward at a 45-degree angle, after dropping about 15 feet into a culvert that collapsed beneath it.

The Fire Department responded at 4:15 p.m. for a call about a Department of Public Works dump truck that fell into a massive hole outside Manning Tower off of West Elm Street in Brockton, said Deputy Chief Joe Marchetti. The city employee operating the dump truck safely escaped the vehicle prior to the arrival of firefighters, Marchetti said. Nobody was hurt as a result of the incident, he said.

The hole was actually a culvert for a river that runs underneath the parking lot, Marchetti said. The dump truck sank into the culvert after the roof of the culvert collapsed underneath it, as the DPW was doing sewer work in the area. Marchetti said the opening was about 15-feet deep, and 20-by-20-feet wide.

“I wouldn’t call it sinkhole,” Marchetti said. “That usually implies a hole in the earth. In this situation, water runs under the parking lot. I’m not sure if a support failed or not – there are beams that span across the culvert.”

It took about three hours to remove the city dump truck from the culvert after firefighters first got there, Marchetti said. The heavy duty vehicle was removed by a tow truck operated by the Brockton-based Lynch’s Towing, he said.

“The Brockton Fire Department put one of Lynch’s towing members in a rescue harness,” Marchetti said. “We had ropes attached to him to keep him safe as he attached their chain onto the truck in order to pull it out.”

Department of Public Works officials remained at the scene on Tuesday night, guarding the collapsed culvert, as they assessed the damage.

This story will be updated later with more information. Check out the video below taken by The Enterprise live from the scene.