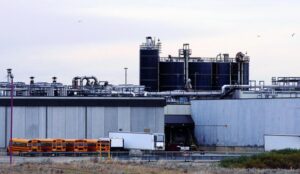 The JBS meat packing plant in Brooks is shown in this undated handout. More than $230,000 worth of beef was recently stolen from the plant and is still missing, according to RCMP.–SUPPLIED PHOTO

The Brooks RCMP are investigating the theft of a large quantity of beef from the JBS meat packing plant near Brooks.

On August 30th, a transport truck that was subcontracted to haul a full load of beef from the JBS meat packing plant to the United States failed to make its delivery. It was later determined that the transport truck was operating under fraudulent documents and under the fraudulent name of “Transport Pascal Charland” out of Chateauguay, Quebec. The full load of beef was valued at over $230,000 and is unaccounted for to date.

The transport truck used was described as a burgundy coloured semi-truck with a large bunk. It was pulling a white refrigerated enclosed trailer.

The suspect was described as a Caucasian male, with short slightly-balding brown hair. The suspect is tall with a heavy build and was wearing blue jeans, a black T-shirt, yellow fluorescent vest and a surgical mask.

Brooks RCMP continue to investigate and are asking for the public’s assistance for any information in relation to this incident including identifying those responsible. If anyone has information about this crime, please contact the Brooks RCMP at 403.794.4400. If you wish to remain anonymous, you can contact Crime Stoppers at 1.800.222.8477(TIPS), online at http://www.P3Tips.com, or by using the “P3 Tips” app available through the Apple App or Google Play store.