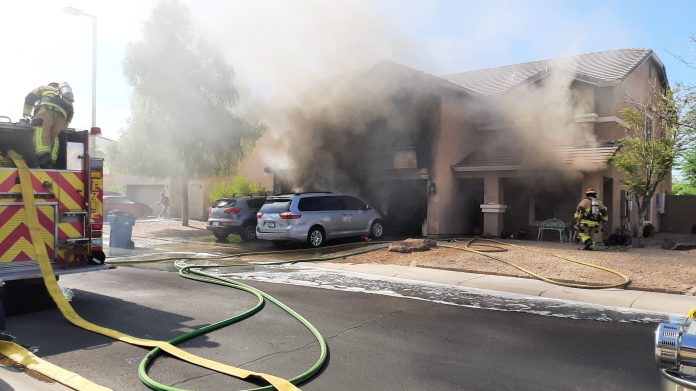 Buckeye Police Assistant Chief Bob Sanders was driving to a meeting when he heard the dispatch for a house fire near Rainbow Road and Sundance Parkway on Tuesday morning.

Close to the fire, Sanders arrived 55 seconds later at the house to find two burning vehicles in the driveway and a garage engulfed in flames that were quickly spreading to the house, according to officials.

Not long after Sanders arrived, Buckeye Fire Deputy Chief Dave Dubois pulled up to the scene in a pickup truck since he was at a fire station close by.

Both Sanders and Dubois, without any fire gear, immediately went into the house to search for two children who were still inside.

“Once they found out there was a child in the house, there was no hesitation. They went right in,” said Buckeye Police Chief Larry Hall.

The parents and the other two children were already outside of the house.

Within one minute, Sanders and Dubois located one child on a couch and another in a doorway as smoke started to cover them, according to Donna Rossi, spokesperson for the Buckeye police and fire departments.

Both of the chiefs were working, but their roles aren’t typically the first to respond to an incident like a house fire, Hall said.

“These two chiefs, whose primary job is as an administrative capacity or limited operational capacity, … didn’t hesitate for one second, put their own safety on the line to save a child and a house, and to me, they epitomize what we stand for everyday,” Hall said.

Hall added that Dubois is sometimes the first to arrive on scene for incidents like drownings.

When more fire personnel arrived, they were able to locate about a dozen cats in the house and save all but one or two by giving them oxygen, said Hall. In the backyard, firefighters also found seven dogs and transported them to a veterinarian.

The mother had a minor burn on one hand and a firefighter was transported to the hospital for smoke inhalation, but Rossi said no other injuries occurred.

“What we had today was just a couple guys, you know, out there that just did an incredible job, they put other people’s safety as a priority… I’m just extremely proud of both of these public safety officials and I’m proud to serve alongside them,” Hall said.

Hall and Rossi said the cause of the fire still is under investigation.

Reach the reporter at Audrey.Jensen@arizonarepublic.com or on Twitter at @Audreyj101.