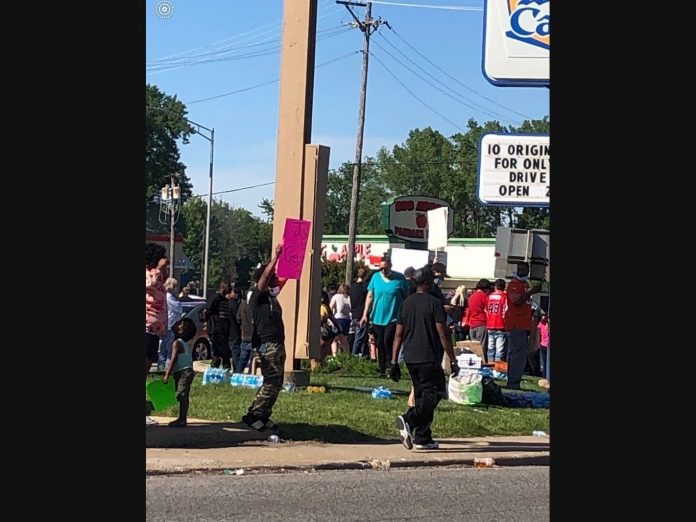 JOLIET, IL — A Mexican grocery store business in the 700 block of West Jefferson Street near the St. Patrick’s Cemetery went up in flames early Monday morning after several hours of unrest and violence prompted the Joliet Police Department to shut down a rally at Larkin Avenue and West Jefferson Street.

About 12:10 a.m., the Joliet Fire Department Local 44 announced on Facebook that engine 5, engine 1, engine 4, truck 1, ambulance 1 and 5 and battalion chief 1 responded to a business fire in the 700 block of Jefferson, and flames were visible when fire engines arrived.

At 1:15 a.m, Mayor Bob O’Dekirk announced on Facebook that “I can’t say enough about the job our men and women on the police and fire department did tonight … there has been almost no looting our officers made multiple arrests (at) every location they tried.”

“Around an hour ago, they tried to burn down the store at Valle Produce 704 W Jefferson St. Our fire department probably saved the building with minimal damage,” the mayor wrote. “The mob threw rocks, bottles, pieces of asphalt and M80s etc. at our officers. I saw every police and firefighter act professional the entire time.”

O’Dekirk said he will be announcing a curfew for Joliet starting Monday night.

“What I really took away from tonight was that many of these people are not from Joliet,” he said. “I’m not sure if most even knew why they were here other than to cause chaos. They have vandalized buildings all over our city.”

Four hours earlier, after 8 p.m. Sunday, Joliet Police Department declared there was an unlawful assembly at the busy intersection of Larkin Avenue and West Jefferson Street. Joliet police also posted an announcement on Facebook informing people to stay away from the intersection.

O’Dekirk also issued a short statement on Facebook saying a Joliet police officer was hit in the head with a rock by the mob and fortunately, the officer was not seriously hurt.

One Joliet resident, Chuck Andrews, produced a Facebook Live video of the incident around 8 p.m. In his video, Andrews remarked that people in the crowd gathered at Jefferson and Larkin were throwing plastic water bottles at the officers and the Joliet Police Department called in several more officers to break up the crowd and shut down the intersection.

His video also showed people from the group standing on top of some of the cars driving east along West Jefferson Street.

At 8:50 p.m., Joliet Police issued another social media bulletin advising everyone to now stay away from the Louis Joliet Mall area. Police suspected that the group may relocate to the area by the mall.

“The Joliet Police Department is asking the community to stay away from the Louis Joliet Mall area due to police activity in the area,” the department announced just before 9 p.m.

WJOL host Scott Slocum announced around 9 p.m. that the protesters were gathering near the JC Penney store at the Louis Joliet Mall and that several police officers in SWAT gear and riot gear were converging all around the mall property.

“What was a peaceful day in the city of Joliet is anything but,” Slocum announced in a Facebook video. “We had the issue at Larkin and Jefferson Street. Now, it’s the Louis Joliet Mall. WJOL has learned that protesters are on the west side of the mall by the JC Penney and the Joliet Police Department has the entire mall area blocked down. Hennepin, Mall Loop Drive, any road leading into the mall is blocked by the Joliet Police Department.”

Andrews told Joliet Patch that police called in several tow truck companies to begin towing away the protesters’ vehicles from the Kmart parking lot on Jefferson and Larkin if they did not heed the police’s warnings that everyone needed to clear out of the area.

At 10:18 p.m., Joliet’s mayor informed people that the Will County Courthouse in downtown Joliet was secured by police and there have been several more arrests near Jefferson and Larkin.

Social media on Sunday was rampant with inaccurate information. One person commented to the mayor that they heard rumors that David Nelson Jewelry on Jefferson Street was destroyed. “Is that true?” the person asked.

Another follower of the mayor’s Facebook page commented: “Thank you for all the updates. Joliet Police have been doing a fantastic job. Everyone stay safe. I am glad arrests are being made so they all know Joliet and Crest Hill we do not put up with this.”

Police Log: Woman Breaks Into Jewelry Store With No Jewelry –...