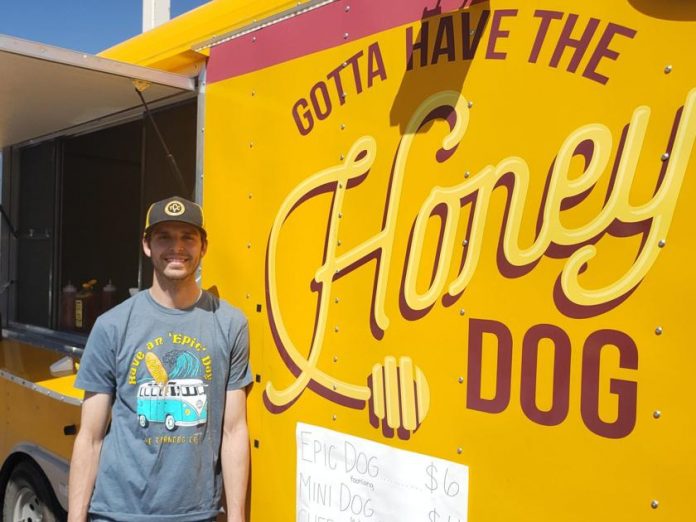 POCATELLO — If you were to seek condiment advice from Clint Eastwood’s character in the 1971 neo-noir action thriller Dirty Harry, he’d say, “Nobody, I mean nobody, puts ketchup on a hot dog.”

But at one of Pocatello’s newest food trucks, the one condiment you should definitely add to each corn dog is not ketchup, but honey, says Michael O’Neal, co-owner of Eastern Idaho’s franchise of The Corn Dog Company.

The self-proclaimed “home of the honey-dog,” The Corn Dog Company has been operating since 2013, according to its website, serving customers in the Utah cities of St. George, Cedar City and Ogden; the Arizona cities of Mesa and Gilbert; Eastern Washington and most recently Eastern Idaho.

O’Neal, a resident of Rexburg, and his business partner, Jerry Dunn, opened the first corn dog food truck last August and used events such as the Bannock County Fair in Downey, the Franklin County Fair in Preston and various corporate lunches at places such as Idaho Central Credit Union and Farm Bureau Mutual Insurance Company of Idaho to build up some brand recognition.

“We did all the Idaho State University football games and many corporate events last summer before parking it for the winter,” O’Neal said. “In the beginning of March, end of April, we stationed that first truck in front of Best Buy at the Grand Teton Mall in Idaho Falls and just acquired this truck for our Pocatello location about a week ago and it should be here all summer long.”

“It’s been poppin’, but that’s awesome and we love it,” O’Neal said. “The great thing about corn dogs is they basically sell themselves, which allows us to focus on what’s most important — providing the best customer service possible.”

Though The Corn Dog Company’s menu is small, its flavors are huge, said O’Neal, adding that the made-from-scratch daily cornbread-style batter and a drizzle of fresh honey separates these corn dogs from all the competition. It also helps that each menu item is $6 or less.

The Epic Dog, a quarter-pound all-beef foot-long dog, and the Cheddar Dog, a corn dog filled with smoked cheddar cheese, are both $6. The Mini Dog, an eighth-pound all-beef dog, and the Cheese Bombs, large cornbread pockets filled with pepper jack, mozzarella and cheddar cheeses are each $4. A battered and deep fried Snickers or Milky Way candy bar is $3. The Cheese Pop, a cornbread pocket stuffed with a Babybel cheese round, the homemade kettle chips and all canned drinks are $2. You can turn any menu item into a meal — which includes kettle chips and a drink or a cheese pop — for an additional $3.

“We buy the dogs ourselves and then make the batter from scratch every day,” O’Neal said. “Obviously, I can’t tell you what is in the batter specifically or I might not have a job anymore, but we do have a few special ingredients that make the corn dogs sweet. Then you make it even sweeter with some honey on the top.”

He continued, “It’s so good. I know it sounds crazy, but it’s delicious man. I can’t tell you why, but people love it. We recommend putting honey on everything on the menu.”

Though you might think the current COVID-19 pandemic created roadblocks or obstacles for O’Neal to overcome, he said it’s actually helped the business.

“All the (dine-in areas of) restaurants are closed so our trucks have just been slammed every day,” O’Neal said. “But we love it. Obviously when things open back up we expect things to slow back down but we’ve been doing great.”

Moving forward, O’Neal said he is hoping to establish trucks in both Island Park as well as Twin Falls, as he owns the rights for all The Corn Dog Company franchises from Twin Falls east to the Wyoming border.

“We’re just trying to keep doing it right one day at a time and it’s just been awesome the amount of support we’ve received,” O’Neal said. “Our biggest goal is to have fun with this and to try and form relationships with our customers that last a lifetime.”

2020 Edition report with Impact of COVID-19 on Truck Fastener Global...

An Exclusive Look Inside The Secret World Of Greyhound Training –...