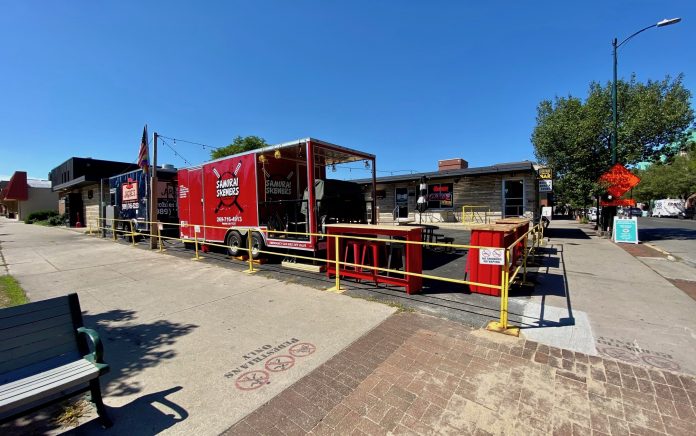 Despite the pandemic, numerous businesses are opening in downtown Traverse City and Kingsley – with additional restaurant and retail moves underway across the region.

Two new companies are opening at The Coin Slot property on East Front Street, adding to a growing mix of small-business entrepreneurs on the site. At 346 East Front Street Suite 9 – the former West Bay Handmade space – partners Amber Edmondson and Raja Howe are targeting a late September opening for Wild Pages, a “marketplace of radical goods for writers, artists, and thinkers.” Edmondson says the store will sell its own hand-bound blank journals, art supplies, paper, fine writing instruments – like fountain pens – and a “thoughtful selection of books.”

“We hope to resume art workshops and literary reading events in post-COVID days,” Edmondson adds – a continuation of Wild Pages’ work in Marquette, where Edmondson and Howe operated for two years before deciding to relocate to Traverse City. The partners will have 50 percent more square footage in their TC location and will be closer to family, Edmondson says. “The move really has been a conscious act of simplifying our lives…we’re both writers and artists, with so much connection to those communities in the TC area, so it just felt like the right fit for us and for our shop.”

In The Coin Slot parking lot, husband-and-wife team Brian and Leanne Canning opened new food truck Samurai Skewers last week (pictured). The couple recently relocated from Kalamazoo to “put everything into this venture,” they wrote to The Ticker, serving up skewers featuring hand-cut meats, house-made marinades, and vegan options with local produce. An early customer favorite is a chicken yakitori skewer served with fried rice and pineapple habanero dipping sauce. Samurai Skewers will operate through the end of October on Monday, Tuesday, Thursday, and Friday from 5pm-10pm and Saturday-Sunday 2pm-10pm (closed Wednesdays), with lunch service potentially to come. Both Wild Pages and Samurai Skewers add to a burgeoning mix of businesses on the site, including The Coin Slot, Tabletop Underground, Rad•ish Street Food, and Archie’s Food Truck. The Coin Slot owner Scott Pierson says he’s on the hunt for two more tenants to complete the campus, filling one open retail space and a new food stall.

Also in downtown Traverse City, Leif Kolt has opened Black Candle Tattoo Co. at 140 East Front Street Suite 4 (in Front Street Commons, aka the Arcade). Operating by appointment only, the fully custom tattoo shop specializes in modern tattoo styles like newschool, neo-traditional, and fine line blackwork. Future plans include piercing coming in 2021, a small roster of new artists, and massage therapy within the next few years. Kolt says he plans to offer a 25 percent discount each month to one firefighter, teacher, medical professional, police officer, and soldier or veteran to give back to “the people who serve our community.”

In downtown Kingsley, Village Manager Dan Hawkins proudly notes that while three businesses have closed during the pandemic, another eight have either opened or announced plans to open soon in the village. That includes new restaurant J. Wall Diner, which Chris Roehler – owner of Rolling Farms Café in Traverse City and Judson Market & Restaurant in Kingsley – is launching soon in the former Whirly’s space at 413 Main Street. Other recent new businesses include Chickadees, Redefined, Papa John’s, Kingsley Floral & Gifts, Optometrist Dr. Clayton Skrzypczak, and the reopening of Absolute Building Solutions. Terry Beia is the managing member of Southtown Property Management, which Beia says controls roughly half the commercial property in Kingsley, and is “seeing incredible momentum right now in the village.”

“All of our commercial and residential properties are filled with the exception of two units downtown,” he says. “I’m in the final stages of lease negotiations on both spaces. I’m also seeing more interest from Traverse City businesses looking to expand into Kingsley.” Beia attributes the growing interest to commercial pricing – he says rents are $10-$12 per square foot on the main drag in Kingsley, compared to rates twice that high in downtown TC – as well as lower residential home costs for owners relocating. “Kingsley is finally breaking through its old stereotype…it’s really on a roll,” he says.

In other restaurant and retail news…
New medical marijuana dispensary Cloud Cannabis has opened its doors at 356 Munson Avenue in Traverse City. The retail location, the company’s second in Michigan after Muskegon, offers a wide variety of flower, concentrates, edibles, and topicals. “Our mission is to make Traverse City a happier and healthier place by curating the best quality products with a knowledgeable staff to help everyone Live Higher,” says John Bashi, the company’s retail sales director. Cloud Cannabis is open seven days a week from 11am-9pm.

Evola Music has relocated from its long-time home on South Airport Road to new digs at 1123 East Eighth Street. The new location offers expanded showcase room to highlight piano and keyboard products. The annual Interlochen Piano Sale – typically held on Interlochen’s campus – will instead take place this year at Evola Music’s new space, with previews available by appointment Thursday-Friday this week and the main event taking place Saturday from 10am-5pm.

Robby’s Mexican & Spanish Cuisine has launched a new food truck called Robby’s On The Go. The truck is currently stationed on Sixth Street near the Munson Medical Center parking garage. Menu options mirror many of those found at the Robby’s restaurant, including nachos, tacos, burritos, taco salad, and sides including rice, beans, and guacamole or salsa and chips.

Waterfront restaurant and bar South End Tiki & Resort could soon be under new ownership. The popular summer destination on South Perrins Landing is under contract with potential buyers, according to real estate agent Sam Flamont, with their identities remaining private until a deal is finalized. The 3.75-acre property with 265 feet of Lake Leelanau frontage, a state-licensed marina, on-site gas, two liquor licenses, an 18-site campground, and nine mobile home lots was listed in February for $850,000, according to listing details on RE/MAX Commercial. That price was dropped to $775,000 in June; the listing shows the property is actively under contract, with backup offers being accepted.

Finally, multiple local businesses have shortened their hours or even temporarily closed due to staffing shortages during the pandemic. The Speedway gas station at the corner of Division and West Front streets abruptly shut down last week, putting a sign on the door saying the business would be “temporarily closed until after Labor Day due to staffing shortages.” Osorio Tacos y Salsas also shuttered its food truck on US-31 for the season, saying on Facebook that “due to the lack of help we were forced to close early.” Third Coast Bakery limited its hours this week to 6:30am-1pm Monday-Friday “due to a temporary staffing shortage,” though the bakery said it hoped to resume normal hours by Saturday. Short’s Brewing Company in Bellaire also cited staffing shortages when announcing new reduced hours of Monday-Thursday 12pm-8pm, Friday-Saturday 11am-10pm, and Sunday 11am-pm. That’sa Pizza permanently closed its Munson Avenue location and also shut down its dining room and bar at its North Long Lake Road location, offering takeout and delivery only – changes it attributed to a shortage of employees. While not specifically referencing staffing, The Bite Food Truck in Northport also announced this week it was closing early for the season.

The Ford-Volkswagen Pickup Truck Is Right Around The Corner

Fire next to Salvation Army facility in Perris spreads to field,...