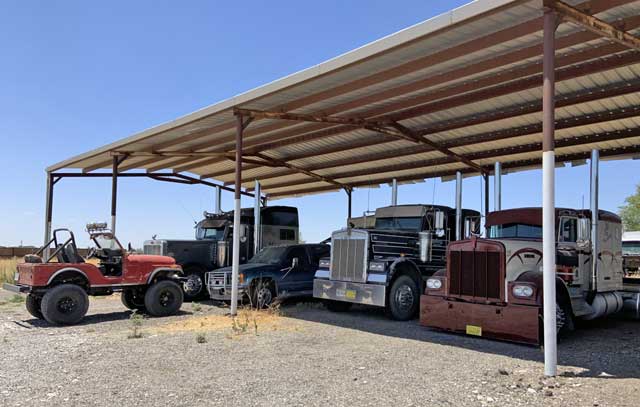 A local businessman involved in a difficult, years-long zoning dispute with a neighbor says he has done everything he can to comply with Chaves County officials’ requests and to meet the intent of zoning regulations.

Ignacio Campa, an owner of the family business NG Trucking Inc., said he no longer runs his trucking business out of the 3768 Crossroads property located in the county near Old Dexter Highway.

He said that he sometimes has a few trucks parked on the 40-acre site, but that he owns other property to operate his business, property purchased since complaints began about four years ago. That includes a yard at South Virginia Avenue and Forest Street in Roswell used for truck maintenance, as well as land near U.S. 285 heading toward Artesia where most of the company’s 10 trucks operate from.

“We have done what they (county officials) asked,” said Ignacio Campa’s daughter, Claudia Campa. “He buys property, and he parks his trucks over there.”

Recently Neil Binderman, a neighbor about 660 yards to the west on Crossroads who has been a vocal opponent of Campa’s trucking operations since 2015, told county commissioners that he intends to file a writ with the New Mexico Supreme Court to compel action if nothing is done soon.

“The county commission’s refusal to point-blank enforce their own rules and regulations is going to set precedent. It is going to open the floodgate that anyone can do anything they like and the county commission will stand by idly,” said Binderman, a former police officer who has lived on Crossroads since 2005.

Binderman said the issue has nothing to do with the Campas personally.

The dispute arose because Campa’s property on Crossroads is zoned residential-agricultural, but Campa, who has owned the land for about 19 years, at one time was using the property as the main site for his trucking business. As the successful business grew from a couple of trucks to more than 10, some neighbors began to complain to county officials.

As a result, the matter came before the Chaves County Planning and Zoning Commission and the Chaves County Board of Commissioners. Those groups gave Campa a special-use permit in August 2015 for a year, with instructions to find more suitable property for his trucking business.

When the officials declined to renew the permit after a year, Campa sought in November 2016 to have the property rezoned mixed-use or light industrial. That request was denied in January 2017, but county commissioners gave a six-month extension on the special-use permit to give him time to find other property or remove the trucks.

That’s when Campa reached an agreement to acquire about 20 acres on Everett near U.S. 285. The county commissioners voted unanimously on July 18, 2017, to rezone the property to industrial to allow the trucking operation there, with some conditions. By September, Campa owned the land and began using it for his trucking business.

He said, at this time, the property lacks water, shade and other amenities that would allow him to move all his trucks, including the parked ones, there.

One thing both Binderman and Campa agree on is that nothing special happened recently to prompt Binderman’s recent appearance before the county commissioners to urge more action.

“Essentially after five years of the commission doing nothing, I just got fed up,” Binderman said.

He told commissioners that trucks “thunder” past his house every day, and he added later that he thinks the trucks lack standard mufflers to mute noise.

Campa said his business isn’t responsible for all that noise. He and his daughter said that Crossroads has a lot of truck traffic, including from dairy trucks and farming trucks. Campa explained that he does have racehorses on the land and that sometimes horse trailers come and go. The Campas add that his drivers are at the property in their personal vehicles to pick up paychecks, but they stressed that large semis are not coming and going from the Crossroads land on a regular basis.

The Campas said that Binderman’s complaints are unreasonable, adding that perhaps he shouldn’t have purchased land in a rural area.

During the 2016 rezoning request, several neighbors wrote in support of Campa.

The Campas also note that Binderman has filed a lawsuit against Pirtle Farms of Roswell, which is growing crops near Binderman’s home.

The case, filed in July 2018, is in the New Mexico 5th Judicial District Court and includes allegations that dust from substantial manure piles used for fertilizer caused harm to Binderman’s orchard and made breathing difficult for him and his wife. Pirtle Farms has denied that the manure was “toxic” as asserted, has responded that the dust is due to truck traffic rather than manure, and states that the New Mexico Right to Farm Act protects its activities. Binderman was granted a preliminary injunction in February 2019, but the case is continuing in the courts.

In regard to the NG Trucking situation, county officials have said they have referred the matter to legal authorities and will evaluate if other steps are needed. But the Campas said that, as far as they are concerned, the issues were resolved years ago when they bought the U.S. 285 property.