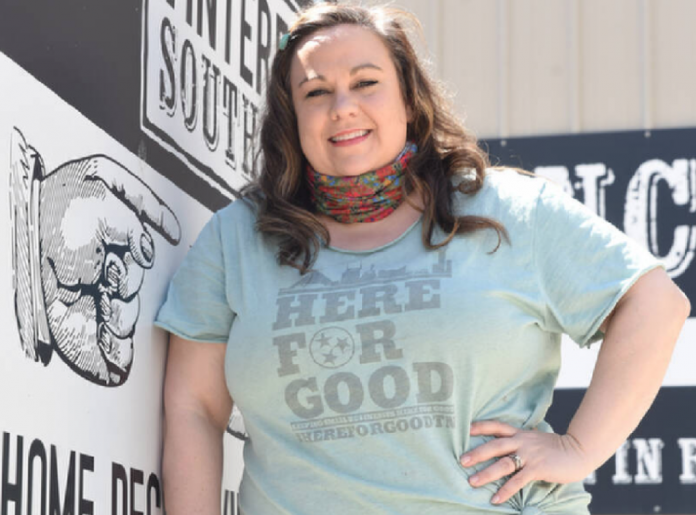 It’s not exactly the shirt off his back, but the owner of a Murfreesboro, Tennessee, screen-printing company is boosting small businesses statewide with his latest T-shirt design.

Shelby Craig, 37, said the idea for #HereForGoodTN T-shirts arose after the company he founded four years ago, Rocket Shirts, made just $200 the second week of March and in two weeks’ time lost $500,000 in canceled contracts for the year.

With the coronavirus pandemic putting lives in lockdown, Craig’s revenue sources were drying up.

“Schools shut down. Events shut down. Sports teams shut down,” he said. “I was looking at it thinking, ‘My revenue stream is going away, but at least we still have churches.’ Then churches shut down. Holy moly, this is crazy.”

He hoped to piggyback on an idea a friend in St. Louis had begun with her company, Tiny Little Monster, using sales of themed T-shirts to support small businesses. But #HereForGoodSTL had a different twist: multiple shirts for multiple businesses. Craig wanted a plan that was easier to execute: one shirt with statewide appeal.

He and a Rocket Shirts graphic designer began brainstorming ideas for images, eventually settling on a skyline that depicts icons from across the Volunteer State: the Memphis Pyramid, a riverboat, Nashville’s Batman-esque AT&T Building, a guitar, the peaks of the Tennessee Aquarium in Chattanooga, a locomotive and the Sunsphere tower in Knoxville.

Shirts sell for $20, with half going to Rocket Shirts and half going to another small business designated by consumers ordering the shirts.

“We were just going to start with a few companies that we love,” Craig said. “We thought, ‘We’re not even going to ask [if they want to be included]. We’re just going to do it because we love them and we know they’re struggling.'”

Powered by social media and word of mouth, that initial handful of small businesses has now grown into more than 530, including independent contractors, gutter installers, roofers, plastic surgeons, chiropractors, wineries, realty groups and hemp shops. Small-business owners can contact Rocket Shirts to be added to the list. Initially, the company was accepting nominations from the community at large, but now asks that owners contact the company directly to streamline the process.

Katherine Schurer, co-owner of Vinterest Antiques in Hixson and Vinterest Southside in downtown Chattanooga, said her stores were nominated for the list by a Facebook follower who lives in Nashville. Benefiting from sales of the T-shirts “was amazing,” said Schurer, whose stores were closed from March 25 to April 30 and reopened to brisk business on May 1.

“For the entire month of April, both of our locations were shut down, and my husband and I absorbed all the overhead costs,” Schurer said. “The selling of those T-shirts is helping us recoup.”

Schurer said she and her husband, Paul, covered the cost of April’s rent for their vendors out of pocket, which wiped out their personal savings. They have since been approved for funds through the Paycheck Protection Program, a federal loan provided as a direct incentive for small businesses to keep their workers on the payroll.

Tennessee businesses reportedly received more than $6.5 billion of these forgivable loans from the U.S. Small Business Administration, but demand for the loans under the federal coronavirus aid package still exceeds the amount of funds available.

Schurer said T-shirt buyers have funneled about $2,000 in proceeds, $10 at a time, to the Vinterest stores.

“It gave us hope — the program really gave us hope and got us some liquid funds as we were waiting on funding and waiting to reopen,” she said.

“I love the idea, but apparently our customers are not interested in buying that shirt,” she said. “They’d rather have something from us.”

Gift certificates have been a better source of cash flow for her and her co-owner/husband, Greg.

“Even people who don’t ride, who aren’t motorcycle enthusiasts, have come in and said, ‘Hey, I want to help. Let me buy a gift certificate,'” she said.

Payouts from Rocket Shirts are made weekly to registered businesses. By April 29, more than $110,000 had been raised statewide, according to a profile of the program by the National Retail Federation. The goal is to roll out a nationwide program — 50 screen printers, working with at least 50 businesses, printing 50 shirts in 30 days. As an industry, that would mean $1.25 million for small businesses. Craig said about 40 states are participating to date.

Craig said he’ll keep making the shirts as long as there’s a need and an interest. He recently added ball caps to the inventory, a suggestion of out-of-work hairstylists whose names have been added to the business list.

“We decided on hats since everybody’s walking around looking like a Yeti,” he said.

Craig said the boost to his business has enabled him to keep Rocket Shirts’ three employees on the payroll and hire two more people.

“We’re shipping on average 500 shirts a day,” he said. “We completely fill up a mail truck every day with T-shirts.”

* See the selection of #HereForGoodTN shirts and hats, and choose a Chattanooga small business to help with your purchase, at rocketshirts.net.

How Truck Accidents Are Different Than Car Accidents | The Brown...